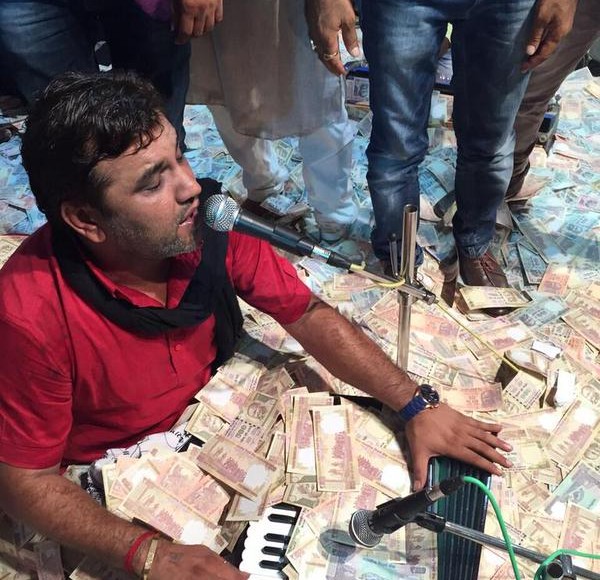 Jamnagar (Gujarat), June 1 (IANS) A programme of hymns and folk songs held for the cause of cow-protection here in Gujarat evoked an astounding response – raising a staggering Rs.4.5 crore.

The programme was held on Friday in Jamnagar district’s Kalavad town where an audience of over 5,000 people gathered to listen to singer Kirtidan Gadhvi and left appreciating the singer by showering wads and wads of money.

“I would like to inform all my dear fans that the money showered was all given for charity,” a delirious Gadhvi tweeted on the development.

The KSS, run by Nilesh Sakhiya, a former NRI from London who returned to India and settled in his home in Haripar village of Kalavad sub-district, had organised the night-long bhajan and folk songs event by Gadhvi for the cause of cow protection.

Ramesh Patel, one of the event managers, told mediapersons that the entire amount collected out of the ‘dayro’ programme, would be spent on cow protection, and other social services like building hospitals in the state.

The famous ‘dayro’ (Gujarati folk songs and hymns) singers Gadhvi and Maya, sang throughout the night on Friday, as the crowds kept showering them with currency notes.

At one point early Saturday morning, the stage was covered under the currency notes of Rs.1,000, Rs.500 and Rs.100 that kept coming almost endlessly from the crowds.

The record-breaking collection and the Gadhvis’ performance earned him kudos on social networking sites. He plans to visit Canada soon for performances.

Last month, Gadhvi was awarded the Best Singer of the State by Gujarat government.