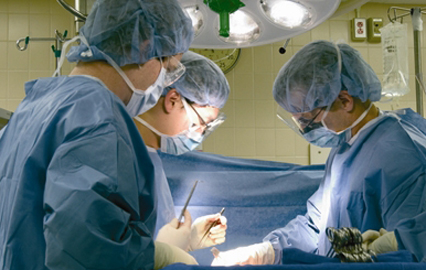 TORONTO: A commentary in a prominent medical journal says patients ought to be told when doctors-in-training are going to play an active role in their surgeries.

Author Dr. Chryssa McAlister says some supervising doctors are very good about telling patients how active trainees will be during their procedure.

But she says others are not as forthcoming.

An ophthalmologist, McAlister recalls being told not to speak by some of her instructors when she would do key parts of procedures like cataract surgery.

The idea was not to bring to the attention of the patient that she, not her supervisor, was wielding the scalpel.

In a commentary in the New England Journal of Medicine, McAlister says that was “clearly deceptive” and at odds with what was needed to establish a relationship of trust between doctor and patient.

McAlister practises in Kitchener, Ont., and also teaches at the University of Toronto. She does not currently have surgical trainees working with her.

She suggests several things may be behind the decision of some doctors to not fully inform patients of the role trainees will play during their surgeries.

Some doctors suggest they worry that if patients are informed, they may veto the involvement of trainees, McAlister says. But doctors-in-training need to get hands-on experience.

She says the medical literature is divided on whether patients actually object to trainees being involved in their surgeries. One study from 2012 suggested the more people know about the role of trainees, the less likely the patients are to consent to their involvement.

But another, conducted in Edmonton, found that 95 per cent of cataract patients were willing to allow residents to be involved in their procedures after having a discussion about the role of the trainee.

“It’s not unanimous in the literature. But I think a lot of it has to do with the surgeon and how they discuss trainee participation with patients,” McAlister said in an interview Wednesday.

She suggests some doctors may feel providing detailed information about the role of trainees in a planned surgery would unduly worry the patient.

And in some cases, the decision not to pass on the information might relate to time _ specifically, how much of it is required to get informed consent from a patient.

“The informed consent process is hugely laborious. And I lose patients because of the details,” McAlister says, clarifying that by “lose” she means that patients get overwhelmed by the detail.

“So if I had to add to that a detailed discussion about trainees, I think it would be pretty challenging.”

That said, she is advocating for sharing more information with patients, saying teaching hospitals need to be clear with people who are undergoing surgeries what role trainees will play.

Website allowing people to rent out their bikes makes inroads in...