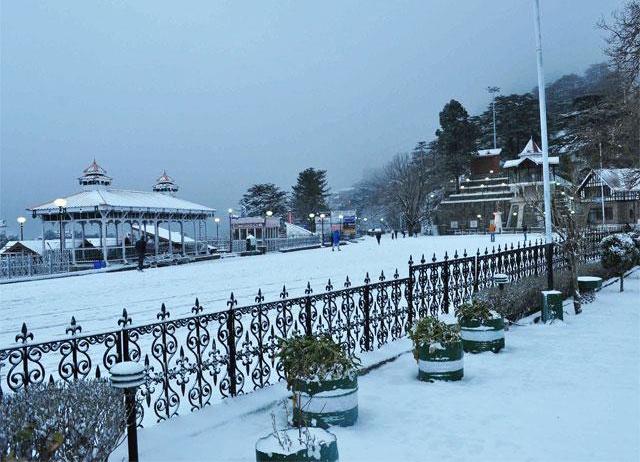 Shimla town received snowfall on Tuesday, bringing cheer to tourists in the hill station. This was the heaviest snowfall in the Himachal Pradesh capital this winter.

With dense fog engulfing the Indira Gandhi International (IGI) airport in New Delhi, many flights were affected. Most of the flights, especially in the morning, departed much later than their scheduled time.

According to the Northern Railway, 14 trains were running late due to fog in and around the national capital.

In the plains of Punjab and Haryana, people shivered due to cold wave conditions, as the maximum temperature at most places dipped by 5-8 degrees below normal.

Vehicular and train movement was affected in the region due to fog in many places. Visibility was reduced to less than 100 metres at many places.

In Jammu and Kashmir, cold wave conditions, especially in the Kashmir Valley, continued, with Srinagar recording a low of minus 2.3 degrees.

In Himachal Pradesh, places located at higher altitudes were cut off from the rest of the country due to heavy snowfall.

“Shimla and its nearby areas experienced snowfall,” an official of the meteorological department told IANS.

Nearby tourist places like Kufri and Narkanda also saw snowfall, which covered the places in a white blanket.

Snow is considered good for the apple crop.

As news of the snowfall in Shimla spread, tourists flocked to the place known for the imperial grandeur of buildings that were once institutions of power when the town served as the summer capital of British India.

“For the first time, we have seen snowfall,” said Ridhima Ohri, a tourist from Chandigarh, who was in Shimla with her friends.

The snowy landscape in Shimla will stay this way for two-three days, an official of the Met department said.

“High-altitude areas of Lahaul-Spiti, Chamba, Kullu, Kinnaur and Shimla districts have been experiencing moderate to heavy snow,” the official said.

Manali, which was cloudy, experienced a low of minus 1.6 degree Celsius. The Rohtang Pass, some 52 km from Manali, also saw snowfall.