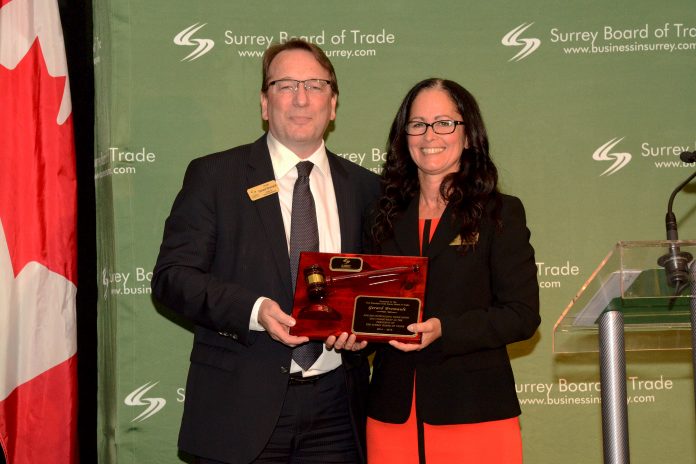 Surrey: With the customary passing of the gavel by outgoing President Gerard Bremault, Shelley Besse, became the fifty-second chair of the Surrey Board of Trade.

Ms. Besse, the president of Envision Financial, a division of First West Credit Union, said her professional life is really about making the human equation in the workplace work. As the Baby Boomers begin retiring in more serious numbers, the next generation is preparing to step up. This will require a great deal of communication as each generation has different learning and communication paradigms.
The object is for the younger and older members to mentor each other as they learn to better communicate, exchange skills, find even better ways to get the work done and pass along the memory of the workplace.

“If we’re going to attract the younger generations, then we need to understand how all generations do business,” Besse said.   She asked the audience to indicate who was a mentor or mentee, and then issued a challenge.
“Imagine if you will,” she said, “how much we could invigorate the possibilities for future leaders in business right here in Surrey, if by this time next year, every single person in this room was either a mentee or a mentor. Let’s make this possible.”

Ian Anderson the President of Kinder Morgan Canada explained the process with which the company plans to go forward, as they seek to bring their TransMountain pipeline expansion to fruition. The project represents a $5.5 billion investment in BC.

The audience of 160 heard about this year’s group of Youth Entrepreneurs who, under mentorship, created and ran a corporation which identified a product to sell, created the financial controls, marketing, HR, Sales departments and other aspects of the real thing. The object over the months of the exercise is to generate revenue but actually selling their chosen product, then winding down the corporation and dispensing the funds to a charity. This year, Covenant House received $887.50.
Governor James Stewart commented that it provides a level of confidence to see these young people from grade 10 through 12 participating in this real life experience.