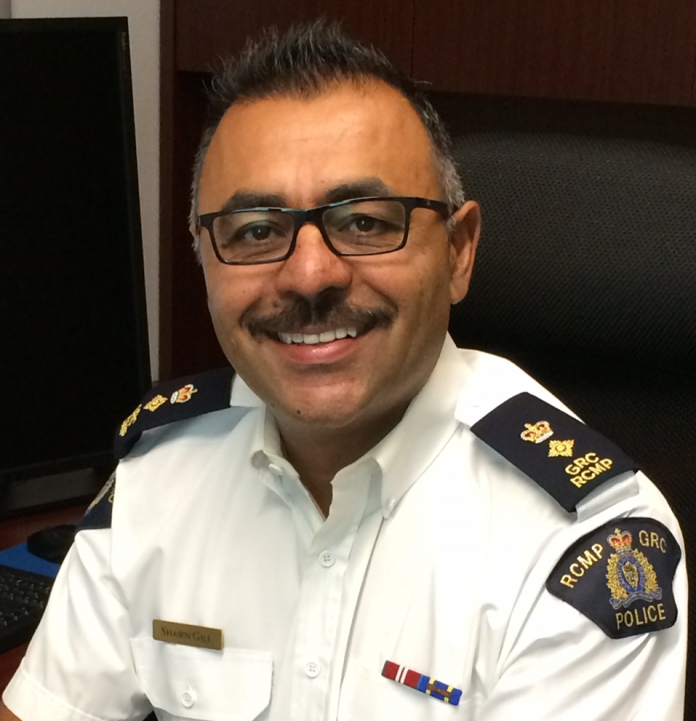 Surrey: Inspector Sharnjit (Shawn) Gill, who was Operations Officer for the Integrated Homicide Investigation Team (IHIT), promoted to the rank of Superintendent in the position of Community Services Officer for the Surrey RCMP. In this new role, Superintendent Gill will oversee all of Surrey Detachment’s community services including: community policing, youth, bikes, property crime, criminal intelligence, drugs, gang enforcement, and traffic.

Superintendent Gill has been with the RCMP in the Lower Mainland for over 26 years and has spent 13 years of his service in Surrey. After beginning his career in Surrey General Duty, he moved to Investigative Services where he worked in the Burglary and Serious Crime Units. Over the next 15 years, Gill gained extensive investigational experience with Langley RCMP Serious Crime, IHIT, Burnaby RCMP Serious Crime, and the Integrated National Security Enforcement Teams (INSET). In 2012, Gill was commissioned as an officer and returned to Surrey Detachment as a Duty Officer for General Duty until he transferred back to IHIT in 2014. Superintendent Gill is also a member of the Lower Mainland Hostage Negotiation Team, and a past member of the E Division Interview Team.

“I feel privileged to be coming back to Surrey and I look forward to working closely with the community to enhance public safety in our city,” says Superintendent Gill. “I am fortunate to have this career in the RCMP and I acknowledge my parents for the significant role they have played – had it not been for their courage and sacrifice in immigrating to Canada in 1969, I wouldn’t be in the position that I am in today.”

Born in Rajiana, India, Superintendent Gill speaks fluent Punjabi and is the second RCMP Superintendent in BC of South Asian descent. He has lived in Surrey for the past 25 years and raised his family here. In his time off, he has been involved in local minor hockey, baseball and soccer associations as a volunteer and assistant coach.

“I am pleased to welcome Superintendent Gill back to Surrey Detachment in this new role. I have known Shawn for many years and am confident that he will bring strong leadership and extensive policing experience to the community services team as we continue our work in reducing crime and engaging citizens in crime prevention,” says Chief Superintendent Bill Fordy, Officer in Charge of the Surrey RCMP. “We police a diverse city and, as such, I am committed to having a diverse senior management team that understands the needs of the different communities in Surrey – Superintendent Gill will be an excellent addition to our team.”

1997 – Officer in Charge Certificate of Recognition for his role in the arrest and conviction of two serial sex offenders.
2009 – Long Service Medal for completing 20 years of service with good conduct.
2012 –Queen Elizabeth II Diamond Jubilee Medal for his role as the Team Commander in charge of the pipeline bombings investigation in Northern BC.