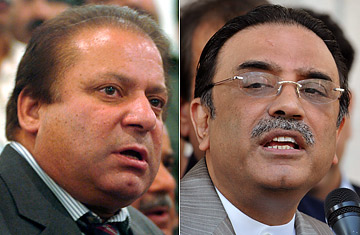 The information minister said Zardari should have shown some care in his selection of words. “It’s not wise to pass such statements when the military is tackling militancy and terrorism,” Dawn quoted Rashid as saying.

Rashid maintained that national security institutions deserve some respect, moreover, “it’s our duty and obligation to honour the services and sacrifices rendered by our security forces”.

Earlier, Sharif said Pakistan was in a state of war, with officers of the Pakistan Army making headway in Operation Zarb-e-Azb. He said at a time like this, criticising the armed forces was unacceptable. He stressed that the army has the full support of the people of Pakistan.

Sharif, in a statement issued by the Prime Minister House, added that democracy has been strengthened because there was harmony between the political leadership and military leadership.

He stressed that criticism of the army would only embolden those trying to destabilise Pakistan.

Addressing party workers in Peshawar on Tuesday, Zardari warned against character assassination of the PPP, saying if they started doing the same then no one would be spared, including army generals. “The army is our institution,” he added.

However, he did not specify what kind of character assassination he was referring to.

Zardari went on to say that army chiefs come and go every three years but the political leadership was here to stay.

“I don’t want the national institutions to weaken.

“If attempts are made to agitate us then we’ll respond accordingly,” said the aggressive-looking PPP co-chairman.