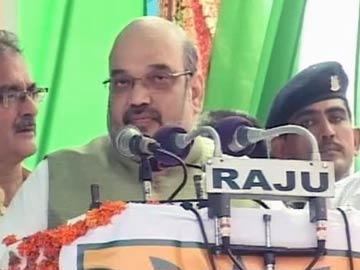 Shah, who was in Goa as part of the one-year anniversary celebrations of Prime Minister Narendra Modi’s government, also said one of the biggest achievements of this central government was to offer India a prime minister who can actually speak, as against the typically muted Manmohan Singh, who was prime minister for 10 years.

“People from the Congress ask what did you do in one year. I want to remind them that in one year, we gave a prime minister who speaks.

“We were desperate to hear the prime minister’s voice for 10 years. He (Manmohan Singh) would never speak. Sometimes he would read a script,” Shah said.

“When they (Congress-led UPA) were in government, the country’s economy was derailed. This was the way a great economist governed this country. India’s economy had fallen on its face. The BJP has transformed this,” he said.

Shah’s comments come a day after a meeting between Manmohan Singh and Modi at the prime minister’s residence in Delhi on Wednesday triggered speculation in the media.

He said it was very difficult to understand who really was running the central government, Manmohan Singh or Sonia Gandhi or Rahul Gandhi.

Criticising Sonia Gandhi and the Gandhi clan for doing nothing to arrest the flow of black money from India, Shah said: “Sonia ji, I want to ask you, your family was in power for 60 years, what did you do (to curb black money)? The people of the country are asking now.”

Shah said Manmohan Singh and Sonia Gandhi appeared unruffled despite one scam after another tumbling out month after month, when the United Progressive Alliance government was in power.

“When scam after scam tumbled out of the UPA government month after month, there was not a wrinkle on the foreheads of Sonia and Manmohan, as if they were used to scam-related news,” Shah said.