Surrey: In September 2016 it will be ten years since SFU Surrey moved from their temporary campus in the former Zellers store on the back side of the Central City Mall, into the permanent 350 thousand square foot campus, described as an architectural masterpiece, designed by world-renowned Architect, Bing Thom.

The Technical University of BC, at Central City Mall, was launched in 1999, and was designed to focus on technology. In 2002 the university closed and the classes were transferred to SFU. Since that time SFU Surrey has become a critical component in the Surrey City Centre nexus, which is the downtown core of BC’s second, and Canada’s twelfth largest city. Befitting a community undergoing a metamorphosis from a Vancouver suburb, to a metropolis in its own right, SFU Surrey has in fact realized the original intention of the short –lived Technical University of BC.

Stephen Dooley became the Executive Director of the SFU Surrey campus in 2013, following twenty years in various positions at Surrey’s other university, Kwantlen Polytechnic. He reflected on the importance of the location and the legacy of the original intention of Tech U.

“The fact that they took a roof off of a mall and put a university on top of it, speaks volumes about how we’re part of the community,” said Dooley. “We’re literally part of the mall. Whenever I give a tour of the SFU Surrey campus, we also take people on a tour of the surrounding community because we are a part of it.”

Dooley pointed out that in the transition to what SFU Surrey has become, the legacy of what Tech U was meant to be, has come about.

“Two of our main program areas here are Mechatronic Systems Engineering (the multidisciplinary field of science that includes a combination of mechanics, electronics, computer science, telecommunications science, systems science and control science) and Interactive Arts and Technology, so we are like a tech campus. Much of these activities are supported by our other programming. Our Beedie School of Business with its Venture Connection assists in the marketing of the really cool things developed in Mechatronics by developing business cases.” 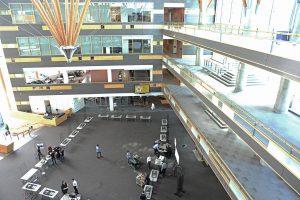 The campus design is also critical to the successful interdisciplinary functioning, as Dolley points out, “this campus has, by its design, always been an interdisciplinary space.” He said the greatest example of that is the Mezzanine entrance/meeting space/ town square where everybody from students to business to the general public can meet, explore, discuss and showcase ideas and achievements in science, business, the arts and community development.

“We have a lot of students here, grad and undergrad students who we support. With the Full Time Equivalent being about 3100, the actual number of students that take a course here at any one time is over 8,000. But at the Surrey campus, we also have a big research agenda. The researchers who work out of the Surrey Campus have been unbelievably successful in terms of attracting funding from national and international sources, and it’s really helping to locate this area of Surrey as a leader in all kinds of different innovations. As such it really was the catalyst for Innovation Boulevard, that we were able to bring people like Dr. Ryan Darcy and others who have amazing skills in terms of their own research and capacity, and I think that’s really important. I don’t want to de-emphasize the importance of supporting undergraduate students, we are here for them, but I think being a research intensive university, we bring a lot to the table and can really help the city grow its profile in becoming a regional leader instead of a bedroom community of Vancouver.”

The strength of the world class programs in key areas like Mechatronics, Electronic Arts and Business have created highly attractive learning options for domestic and foreign students alike.

“This spring we had 612 international students at SFU Surrey, 251 from China, 66 from India and then others from Pakistan and Iran,” said Dooley. “It’s interesting that our Mechatronics Engineering Program has a high proportion of our international students, and that’s an example of how we are drawing the best minds from around the world to study right here in Surrey in a leading engineering field.”

To be the “Engaged University,” SFU has become an integral part of the community, working closely with partners, the City of Surrey, Surrey School Board, Fraser Health and many other entities. In the second part to this report we will elaborate on the partnerships and their work, and how it engages and involves all sectors of the community from social issues like Gang Violence to the intention of ultimately rivaling Silicon Valley as a ‘tech hub.’ We’ll look at SFU Surrey’s role as co-lead in a $36.6 million national Age Well Initiative, the Agri-Innovation Signature Projects, and more on Innovation Boulevard, and what all these activities mean in terms of improving the lives.