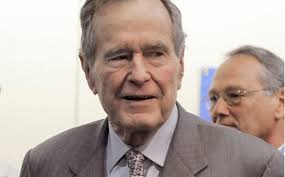 Washington: Another woman has accused George H.W. Bush of touching her inappropriately while he was still in office in 1992, the seventh such allegation levelled against the former US President, the media reported.

The 55-year-old woman from Michigan told CNN on Thursday that the incident took place when she was attending a fundraiser for Bush’s re-election campaign in Dearborn, with her father when the President grabbed her behind during a photo-op.

“We got closer together for a family photo and it was like ‘Holy crap!’,” she said. “It was like a gentle squeeze.”

In the moment, the woman said, she just smiled for the camera. There were people all around, including US Secret Service, but she does not believe anyone else noticed.

She said she rationalised the moment to herself back then by saying they were moving closer together for the photo and so “it was probably an accident”.

Recent reports about six other women who said the former President had groped them during photo-ops between 2003 and 2016, made her rethink that incident.

“All the focus has been on ‘He’s old’. OK, but he wasn’t old when it happened to me… I’ve been debating what to do about it,” she told CNN.

Bush spokesman Jim McGrath has declined to comment on this latest allegation.

However, McGrath has issued apologies when the other accusations had come to light.

On November 1, Laura Bush, the wife of George W. Bush, said that the alleged incidents against her father-in-law were innocent.

“I’m just sad that we’ve come to this… That was something that was very, very innocent that he’s been accused of. But I know he would feel terrible.”