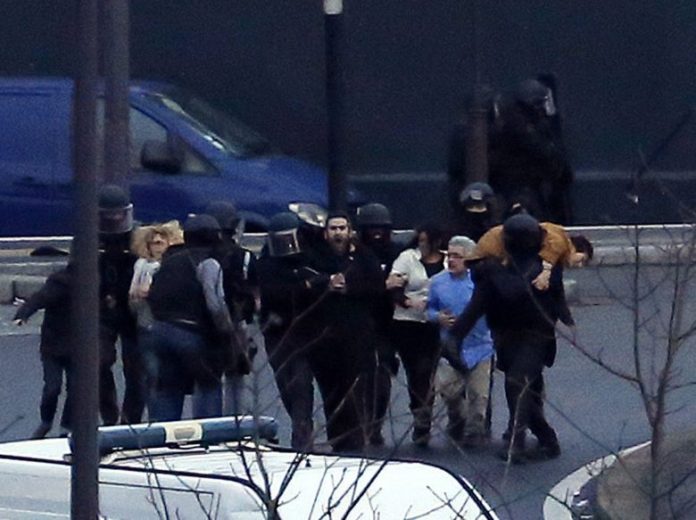 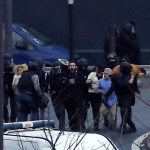 While Cherif and Said Kouachi, the two brothers wanted in the attack on the offices of Charlie Hebdo magazine that claimed 12 lives, were killed in a printing company’s office at Dammartin-en-Goele, northeast of Paris, the third gunman, along with four hostages, were killed at a Jewish grocery store at Porte de Vincennes in southern Paris, media reported. 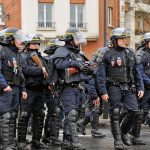 The killing of the Kouachi brothers was confirmed by Bernard Corneille, the mayor of the nearby village of Othis, CNN reported. The lone hostage they had taken was rescued alive.

After Couliobaly was gunned down, BFMTV reported that police at the scene shouted “get down!” and “we’ve got him”.

An accomplice of Coulibaly, Hayat Boumeddiene, a 26-year-old woman wanted in connection with Thursday’s fatal shooting of a policewoman, escaped from the grocery store in the confusion as hostages ran away, CNN reported citing police union spokesman Pascal Disand.

Earlier, a police operation was launched in the area where the Charlie Hebdo attackers were holed up, Efe news agency reported citing a statement issued by Interior Minister Bernard Cazeneuve.

An elite unit of the Gendarmerie got into place to carry out an operation, added the minister.

According to the television channel RTL, the suspects, who were brothers of Algerian descent, had entrenched themselves in a printing company office in the town and had taken a hostage.

At around 7.40 a.m. GMT, the two men stole a vehicle belonging to a woman in the town of Montagny-Sainte-Felicite and identified themselves as the Kouachi brothers who were wanted for the Wednesday attack on the Charlie Hebdo magazine office.

A few minutes later, there was a shootout with police in Dammartin-en-Goele.

A witness quoted by RTL said he had heard two shots, and helicopters arrived soon after along with the security forces who ordered residents to stay in their homes and keep their windows closed.

On Thursday morning, a 20-year-old policewoman was killed in a shooting in Montrouge. The gunman wearing a bulletproof vest opened fire on her and a civilian who was responding to a traffic accident.

Egypt enforces travel ban to Libya, after IS killings