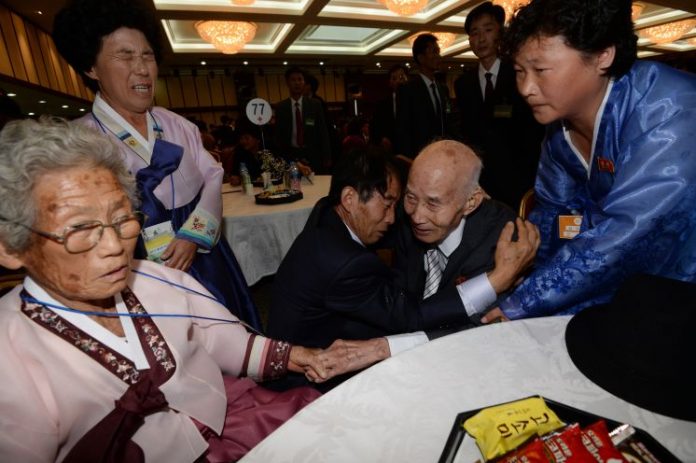 Seoul, Oct 20 (IANS) Korean families torn apart by the 1950-53 war were reunited Tuesday as a result of a major inter-Korean humanitarian programme.

It took 65 years for the father and son to see each other again. There were no phone calls, living on either side of the Demilitarised Zone. They were torn apart by the 1950-53 Korean War.

The two were among hundreds of Koreans given the rare chance to meet their long-lost beloved ones in a family reunion event underway at a South Korean-developed resort in Mount Kumgang along the North’s east coast.

It is the first of its kind in one year and eight months, which came as a result of the August 25 deal between the two Koreas on ending a military standoff.

Earlier in the day, 389 South Koreans of 96 families crossed the eastern part of the border aboard 16 buses to meet 141 North Koreans.

The South Koreans, mostly elderly, plan to stay here until Thursday for a series of six brief reunions that will last just a total of 12 hours.

North Korean border guards closely checked the belongings of South Korean visitors, including the laptops of South Korean reporters, during the customs and quarantine procedures that took about one hour.

Another round of reunions involving 250 other South Koreans of 90 families will be held from October 24 to 26 at the resort.

Nearly 130,000 South Koreans are registered in the government’s data system as having families in the North. Half of them have already died, with around 66,000 separated family members on the waiting list.

Since the first inter-Korean summit in 2000, the two Koreas have held 20 rounds of face-to-face family reunion events. There were seven rounds of video-based reunions.