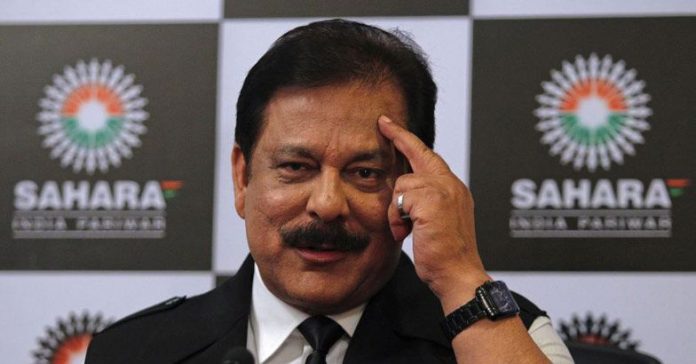 New Delhi, June 19 (IANS) The Supreme Court on Friday gave 18 months to Sahara to repay Rs.36,000 crore of the investors money which its two companies, SIRECL and SHFCL, had collected in 2007-08.

The bench of Justice T.S.Thakur, Justice Anil R.Dave and Justice A.K.Sikri however reiterated the court’s March 26, 2014 order saying that Sahara chief Subrata Roy and two directors will only be released from Tihar jail, where they are in judicial custody, after Rs.5,000 crore cash and a bank guarantee of like amount is deposited.

The apex court had March 4 last year sent Roy and group’s two directors Ravi Shankar Dubey and Ashok Roy Choudhary to custody for not complying with its orders of August 31, 2012 and other subsequent orders to return investors money.

The court on Friday also approved the format of the bank guarantee given to it by Sahara, saying that in view of the total liability, Sahara “shall deposit the balance outstanding amount within a period of 18 months commencing from the date of their release from custody in nine instalments”.

“First eight installments shall be of Rs.3,000 crore payable every two months from the date of their release from custody and last installment shall be of the remaining amount,” the court said in its order.

Pronouncing the judgment, Justice Sikri said: “In the event of the default in payment of two instalments (not necessarily consecutive) the bank guarantee shall be encashed by SEBI.”

The court further said that the bank guarantee would be encashable “in the event of failure” of Sahara to “deposit the full amount outstanding against them within a period of 18 months commencing from the date of their release”.

In another stringent condition, the court in its directions said that in case Sahara “fails to deposit three installments (not necessarily consecutive)”, Roy and two other directors “shall surrender back to custody and in case they fail to do so, they shall be taken into custody and committed to jail”.

Noting that “a large amount remains to be deposited” by the Sahara, the court said: “We direct the contemnors (Roy and two directors) to deposit their passports in this court within 15 days from the date of this order or before their release, whichever is earlier. They shall not leave the country without prior permission of this court.”

It further said that Roy and two directors “shall keep police station Tilak Marg, New Delhi informed and updated about their whereabouts every fortnight”.

The court said that it had released some of the Sahara properties to facilitate it to raise the money to return to investors and allowed Sahara to apply for “permission to sell any further property within 15 days from their release in order to enable them to raise funds for deposit of the required amount”.

However, the possibility of Roy coming out of jail immediately has diminished as Kapil Sibal, appearing for him, informed the court that the foreign bank that was standing as guarantor has withdrawn following media reports on SEBI insisting on a trigger point for encashing the bank guarantee. He said that they will be arranging a fresh bank guarantee, for which efforts are on.

As Sibal sought clarification as to when Roy and two other directors would be released, the court said that they would be able to walk out of the jail only after complying with the conditions of the March 26, 2014 order, adding it had made this position clear many times in the past.

At this, Sibal did not press the plea for their release on parole for six weeks.

He also urged the court that the amount that has already been paid should be adjusted against the principal amount as it would have a reduced bearing on interest liability. The court asked Sibal to make an application to that affect.