Langley: Save-On-Foods will donate a quarter of a million dollars to support local Western Canadian food banks after a successful first-ever Share It Forward weekend.

The campaign, which ran from June 15-17, saw 25 per cent of net proceeds from every Western Family product sold at Save-On-Foods and PriceSmart Foods set aside to support local food banks. Food banks will receive a portion of the $250,000 total based on the amount of money raised at the stores in their communities.

With more than 160 stores from Winnipeg to Whitehorse to Vancouver Island, Save-On-Foods is Western Canada’s largest grocery retailer and is known for being an active part of every community where it does business. Each year, Save-On-Foods donates food and consumer goods worth more than $3 million to local food banks in Western Canada along with hundreds of thousands of dollars in cash raised through community and store initiatives.

Each store promoted and celebrated Share It Forward in its own way, and raised additional funds through in-store activities, including hot dog sales, barbecues, and Spin the Wheel for great prizes. Each local food bank will receive their cheque from their local store or group of stores in the coming days.

“We are absolutely thrilled at the level of enthusiasm our customers and team members showed for Share It Forward,” said Save-On-Foods president Darrell Jones. “Their support means we are able to donate a quarter of a million dollars to food banks across Western Canada, which do amazing work every day to feed families in our communities.” 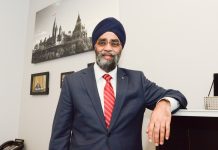 One dead, one injured after shooting in Abbotsford shooting