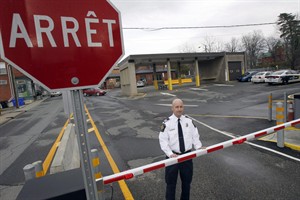 The absence of camera systems and inadequate space to interview travellers also pose a threat to the “general safety and security” of officers at some ports of entry, says the newly released Canada Border Services Agency report.

The border agency must make planned improvements to buildings and computer systems at these smaller crossings in order to fulfil promises under the high-profile perimeter security deal between Canada and the United States, the evaluation warns.

The small crossings account for more than half of the country’s 117 land-border entry points, but they processed just 3.4 million travellers _ less than five per cent of the overall number _ in 2012-13.

Some crossings saw fewer than five travellers a day that year.

Still, there are strong cross-border ties in many of the communities. “Often the nearest grocery store, gas station, school or emergency service is located on one side of the border, making access to border services critical,” the report says.

However, the poor state of facilities is “a major impediment” to the delivery of services. “Numerous occupational health and safety issues have also been identified.”

The border services agency has identified 34 small crossings with buildings more than 40 years old _ including one surpassing 80 years _ which means maintenance issues, health concerns and sometimes no shelter from the elements, the report adds.

The remoteness of some crossings poses a risk due to the distance from police backup or medical services, and the lack of cell-phone coverage in some areas, it says. Yet the personal-alarm radio system used at crossings “has limited ability” to communicate with other entry ports and cannot be used to reach other agencies.

In addition, many locations have only one primary inspection lane, which holds things up should a more detailed examination be required. Numerous crossings don’t have a booth in the primary inspection area, so officers have to take travellers’ documents inside another building to run queries.

The border agency plans to invest $99 million over five years to address the issues as well as upgrade technology to help officers record more traveller information.

A federal working group is also studying options including joint or co-located facilities with U.S. Customs and Border Protection.

The evaluation says the Canadian border agency needs more information to make decisions about managing smaller crossings, particularly given the fact they will soon be compiling exit data from travellers leaving the United States as part of the perimeter security pact.

Work is underway to address the evaluation’s recommendations by June of this year, but “we are still in the developmental stages and no updates can be provided at this time,” said Esme Bailey, a border agency spokeswoman.

Two killed in police raid to get Paris mastermind