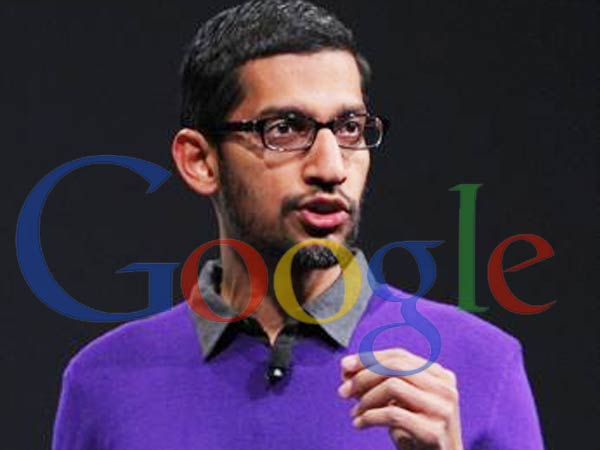 Taking over the operational management of Google’s search, YouTube and financial-services units, Pichai, 43, becomes only the third chief executive of the company after Executive Chairman Eric Schmidt and co-founder Larry Page.

With the change, the company’s founders Sergey Brin and Page will run Alphabet — Page as CEO and Brin as president.

“This new structure will allow us to keep tremendous focus on the extraordinary opportunities we have inside of Google,” said Google chief executive Page in a blog post titled “G is for Google” on Monday.

“A key part of this is Sundar Pichai,” he said.

“Sundar has been saying the things I would have said (and sometimes better!) for quite some time now, and I’ve been tremendously enjoying our work together.”

“He has really stepped up since October of last year, when he took on product and engineering responsibility for our internet businesses,” Page wrote.

Pichai, who came to the US in 1993 after getting a BTech from IIT-Kharagpur, earned an MS from Stanford University and an MBA from Wharton School of Business.

He has worked at Google — which was founded in 1998 — since it went public in 2004, most recently as the senior vice president of product.

He is the second person of Indian origin to head a major IT company after Hyderabad-born Satya Nadella who became CEO of software giant Microsoft in February 2014, succeeding Steve Ballmer.

With his elevation, Pichai joins the big league of Indian-origin CEOs in at least half a dozen Fortune 500 companies, including Indra Nooyi at Pepsi, Ajay Banga at Mastercard, and Sanjay Mehrotra at SanDisk.

Pichai will lead Google with users in mind, said a report in the New York Times suggesting he “owes his new job to his success in making Google products easier to use and thus more popular”.

He “made a name for himself early as a product manager, working on high-profile efforts like Chrome, the company’s web browser”.

“Chrome grew like a weed, exploding from a single-digit percentage of market share to become the most widely used browser across desktops and mobile devices in the world,” it said citing StatCounter.

Google will continue to focus on internet products. Android, YouTube, search and ads will remain part of Google Inc.

Other departments spinning off into their own sub-companies include the Google X lab working on driverless cars, Google Glass and drone delivery.

The Alphabet companies will retain their current leadership. Nest will be led by Tony Fadell, Sidewalk Labs by Dan Doctoroff, and Calico by Arthur Levinson. YouTube CEO Susan Wojcicki will now report to Pichai.

Brin will continue to head up Google X in addition to his role as president of Alphabet. Eric Schmidt will become Alphabet’s executive chairman.

“We are not intending for this to be a big consumer brand with related products-the whole point is that Alphabet companies should have independence and develop their own brands,” said Page.

Phones in 2016 to be more powerful