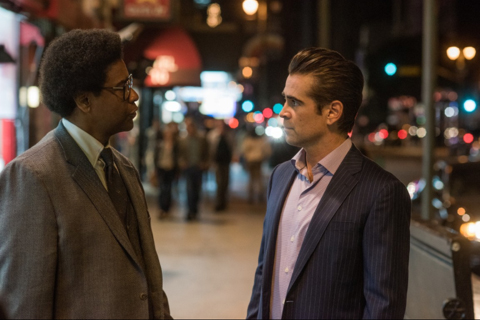 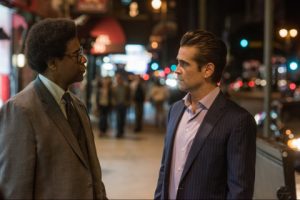 Judge a man by his deeds. Back to school we go as a legal beagle enters the world of big city lawyering in Roman J. Israel, Esq. Well-written and acted with conviction this high-stake drama from Sony Pictures is now in session at various Cineplex halls of Halloween entertaining across B.C.

Make no mistake about it – Denzel Washington can act. Whether he plays a drugged-up pilot, a lethal assassin or a jazz loving gumshoe this cat can do no wrong. Fans of Denzel will appreciate his Going back to his roots and heritage, so to speak, as a rather crusading New Your City lawyer.

With a mind like a computer this mild-mannered legal sleuth is the best as they come. Busy at work in a small two-man firm our biblical named scholar has his work cut out for him with the death of a colleague. In search of the truth that atavistic streak in Roman’s DNA is called into question when one too many cases weighs a bit heavy on his mind.

A brilliant mind and all the good things a man has worked for come into question as a moral dilemma confounds this bright shining light. Career advancement can be a good thing. So how a new era develops for Israel under the high-flying George Pearce is rather telling. Smooth as silk turns out to be Colin Farrell (Phone Booth). Talk about a chameleon actor – like Denzel, Farrell is terrific as a smug know-it-all hot shot slick Wall Streeter whose legal ethics seem driven by the bottom line. Watching these two diverse yet highly effective actors duke it out and transform their personalities is a casebook example of purposeful acting.

Solid performances centered  on morality and tradition make Roman J. Israel, Esq. a well presented drama ideal for those who seek out Justice on all fronts.