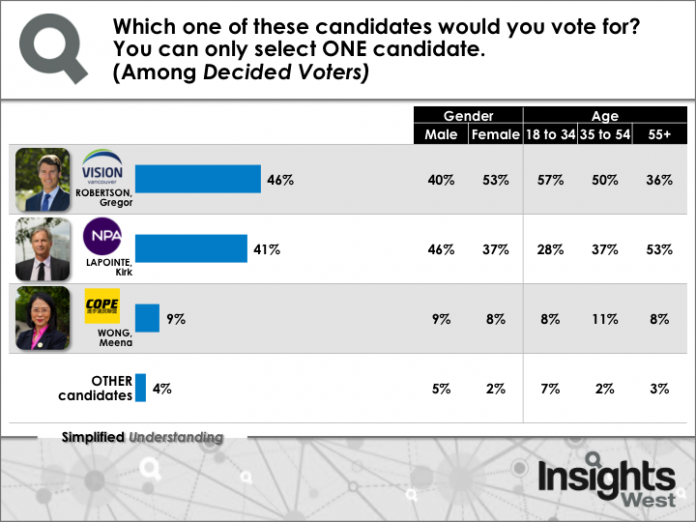 Vancouver: A poll by Insights West poll says that as the Vancouver municipal campaign enters its final week, incumbent Gregor Robertson of Vision Vancouver holds a slight edge over challenger Kirk LaPointe, with more than a quarter of residents still trying to make up their minds, a new Insights West poll has found.

The approval rating for Mayor Robertson stands at 46% (-6 since October). Residents aged 18 to 34 are particularly satisfied with the way Robertson is handling his duties (56%), while a majority of those aged 55 and over (61%) disapprove of his performance.

Housing (44%) remains the most important issue for residents, followed by transportation (16%), poverty (11%) and economic development (9%).

Across Vancouver, three-in-five residents (60%) are following the mayoral campaign “very closely” or “moderately closely”—a proportion that jumps to 81% among those aged 55 and over.

Among decided voters in the mayoral election, Robertson is in first place with 46%, followed by LaPointe with 41% and Wong with 9%. More than a quarter of residents (27%) intend to take part in the election, but have not settled on a mayoral candidate to support yet.

LaPointe is the top choice for male voters (46% compared with 40%) and residents aged 55 and over (53% compared with 36%). He is also holding on to a large majority of voters who supported NPA candidate Suzanne Anton in the 2011 election (86%).

Most decided voters who are supporting either of the two main contenders are certain of their choice (79% for LaPointe, and 69% for Robertson). However, 42% of Wong’s decided voters say they could change their mind before election day.

“The two main contenders in Vancouver’s mayoral race are doing a good job rekindling with the traditional constituencies of their parties,” says Mario Canseco, Vice President, Public Affairs, at Insights West. “The final week of campaigning provides an opportunity to attract the votes of the more than one-in-four Vancouverites who are still pondering their options.”

“Housing continues to be the foremost concern for residents, and Mayor Robertson is regarded as the best person to handle that file,” continues Canseco. “However, LaPointe has made great strides during the campaign to connect on economic issues, and is now seen as an optimal financial manager.”

Insights West is a progressive, Western-based, full-service marketing research company. It exists to serve the market with insights-driven research solutions and interpretive analysis through leading-edge tools, normative databases, and senior-level expertise across a broad range of public and private sector organizations. Insights West is based in Vancouver and Calgary and has seventeen employees.

Results are based on an online study conducted from November 6 to November 8, 2014, among 505 City of Vancouver residents aged 18+ who are Your Insights panel members. YourInsights.ca is Insights West’s in-house access panel offering on-demand samples for both clients and research suppliers looking for Western Canadian populations. The data has been statistically weighted according to Canadian census figures for Vancouver for age, gender and region. Results have a margin of error of +/- 4.5 percentage points, 19 times out of 20. Click here to view the detailed data tabulations for this study.