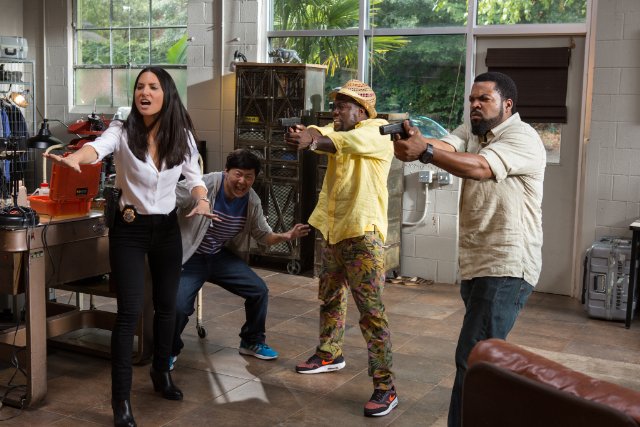 Time and time again audiences have seen cop buddy movies. Sometimes they work – usually they don’t. Now and then Hollywood gets it right. Universal Studios hits the mark with Ride Along 2. Catch this witty fun fiasco at Cineplex Odeon theatres around B.C.

Nothing out of the ordinary confronts viewers in Ride Along 2 – except the undeniable chemistry between its two likeable leads. What Sandra Bullock and Melissa McCarthy unleashed in The Heat Ice Cube and Kevin Hart unleash in this second ride movie. Now it helps with the set up if you saw the outing off this most unlikely police partnership. This time legitimate detective James Payton, one of Atlanta’s finest, is sent to Miami on a special assignment. Control and a by the book approach is just what the doctor ordered and Ice Cube fills the prescription flawlessly.

Unfortunately rookie officer in training Ben Barber, James’s future brother-in-law no less, somehow manages to accompany the new wave Dirty Harry to Florida’s hottest fun spots. Shoot from the mouth first think later Kevin Hart is in prime form as the bumbling side kick who Ramps  up the zaniness to the nth degree.

On the trail of a master Latino drug kingpin the dynamic duo wind up in car chases, crazy fisticuffs  and one zany situation after another. Directed with a Miami Vice plush look by Tim Story Ride Along 2 is just a lot of fun. Handsome Benjamit Bratt is suitably suave and elegant as the dapper mafioso who gives Scarface a good name. Political. Correctness goes out the window here , thankfully. Some unexpected surprises liven things up even mo ore with both Ken Jeong (The Hangover)  and Olivia Munn. . Suitably  appealing in nice  supporting roles.

If you enjoy comedy action flows then tag along with Ride Along 2 .