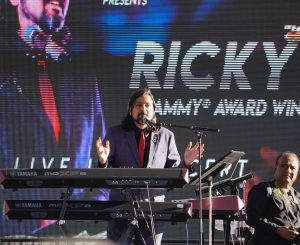 Surrey: The City of Surrey witnessed Grammy Winner and conservationist Ricky Kej perform his “Music for the Planet” at the Surrey Fusion Festival, Holland Park, brought to British Columbia by Vivek Savkur of BC-India Business Network and Presented by Sharn Bhinder, Gold Key Life Insurance which she presented to the citizens of BC, in the interest of our Community to preserve the pristine beauty of Beautiful British Columbia and our country Canada.

Earlier on Friday 20 July Ricky and his group performed at the SFU Surrey Campus in the presence of a select audience at the invitation of SFU, Surrey. Stephen Dooley, Executive Director, SFU, Surrey, the gracious host of the evening, highlighted the objectives of Ricky Kej’s performance in propagating the dangers of Global Warming and Climate change which has endangered the Flora, Fauna and Ecology around the world. The performance of Ricky Kej and his group of very eminent musicians were brilliant in their rendition of a bouquet of fusion music that thrilled the audience.

At the Holland Park, Surrey Ricky Kej Live in Concert’ along with Padma Shree Vishwa Mohan Bhatt, Grammy nominee Ron Korb from Canada, Grammy Winner Jennifer Gasoi from Canada, Grammy Nominee Rocky Dawuni from Ghana, Grammy Nominee Lonnie Park USA, Hai Phuong from Vietnam, Chaitra, Manoj George, Nirmal and Muthu from India were outstanding. The performance was joined by the members of the Surrey City Orchestra. They were all at their very best.

Ricky has dedicated his music to Environmental Consciousness. His music has been creating awareness about harmful effects of climate change and our responsibility towards billions of other living species that live on planet earth other than ‘we humans’

Ricky Kej performed music from his latest album ‘Shanti Samsara’, which was launched by the Indian Prime Minister Narendra Modi and President of France Francois Hollande in the presence of World Leaders at the Paris COP21 Summit. The music gained immense popularity world-over reaching out to millions of fans. ‘Ricky Kej Live in Concert’ ensembled over 50 artists including members from the Surrey City Orchestra, a new creation headed by Ellen farrugia.

Just as the performance was coming to a glorious end, the audience which had gathered in thousands were treated to Ricky’s new production of our Canadian National Anthem which was the icing on the cake. We thank Ricky and his Team for coming to Surrey from different countries of the world to entertain the citizens of Surrey and conveying an important Global Message through their astounding music.