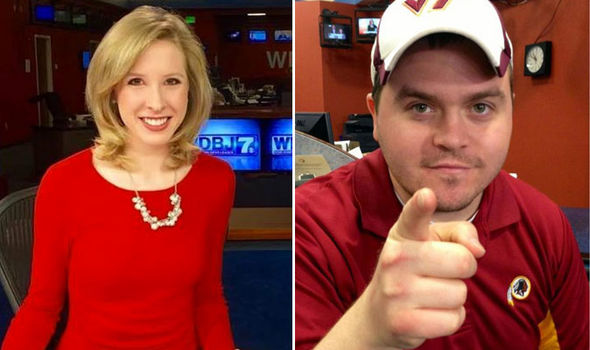 MONETA, Virginia: A TV reporter and cameraman were shot to death on live television Wednesday by a man described as a disgruntled station employee. The man recorded himself carrying out the killings and posted the video on social media as he fled the scene.

A man believed to be the suspect later crashed a vehicle, and pursuing troopers found him suffering from a gunshot wound. He was hospitalized with life-threatening injuries, state police said.

Reporter Alison Parker had been interviewing an economic development official about local tourism as the shots rang out. She screamed, ran and could be heard saying “Oh my God,” as she fell. Adam Ward’s camera captured a fleeting image, including the face, of a man holding a handgun.

WDBJ quickly switched back to a shot of the anchor back at the station, her eyes large and jaw dropping as she said, “OK, not sure what happened there. We will of course let you know as soon as we find out what those sounds were from.”

The suspect is Vester Lee Flanagan II, 41, of Roanoke, said Becky Coyner with dispatch and records at the Augusta County Sheriff’s Office. The station said Flanagan appeared on air as Bryce Williams.

Video of the shooting was later posted on the Twitter account and Facebook page of Bryce Williams, who was on the staff at WDBJ. It showed an outstretched arm holding the handgun and firing repeatedly at Parker as she tried to run away.

The shooter appeared to walk up to the victims and stand a few feet away from them while holding the weapon. The three, in the midst of a live TV interview, do not seem to notice the gunman, who doesn’t start shooting until Ward points the camera at Parker and Gardner.

Parker is heard screaming and is seen running away as shots are fired. Roughly 15 shots can be heard, including several that were fired after the video goes dark.

ABC News reported on its website that the network received a 23-page fax from someone claiming to be Williams. The network said the fax was turned over to authorities, and did not elaborate on its contents.

Federal law enforcement was assisting, and federal officials said there was no indication of a connection to terrorism.

The shooting happened around 6:45 a.m. at Bridgewater Plaza in Franklin County, as Parker interviewed Vicki Gardner about the upcoming 50th anniversary festivities for Smith Mountain Lake, a local tourism destination. Gardner also was shot and hospitalized.

Both the victims were romantically involved with other employees at the station, according to Parker’s boyfriend, WDBJ anchor Chris Hurst. He wrote online that they hadn’t shared their relationship publicly but “were very much in love.” He said they had just moved in together and wanted to get married. “I am numb,” he said.

Parker had just turned 24 and had joined the station as an intern after attending James Madison University, where she was the editor of the school’s newspaper, The Breeze. According to her Facebook page, Parker spent most of her life outside Martinsville, Virginia. She was an avid kayaker and attended community theatre events in her spare time.

Ward, 27, graduated from Virginia Tech University and was engaged to a producer at the station, Melissa Ott, said WDBJ spokesman Mike Morgan.

“Adam was our go-to guy. He pretty much was available to do anything that we asked,” Morgan said. “He did live shots during our morning show for several years.”

The station is based in Roanoke, Virginia, and serves the southwest and central part of the state. The shopping mall where the incident happened is just off Smith Mountain Lake in Moneta, about 25 miles southeast of Roanoke.

Police told employees of the station to stay inside the building as long as the suspect is on the loose. About 50 people work there, Marks said.

“We have police protection,” Marks said.