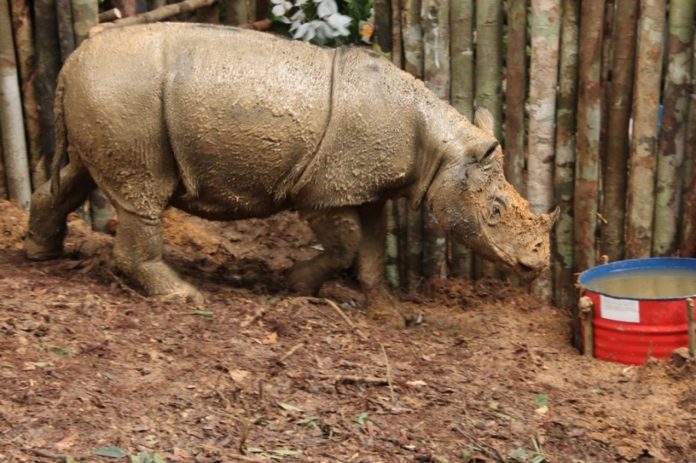 Indonesian conservation experts in Borneo said the female rhino named Najaq had a severe infection from wounds they believe were caused by poaching traps.

Najaq was captured on March 12. She was the first critically endangered Sumatran rhino to be found in an area of Borneo for 40 years.

The species had been thought to be extinct in Kalimantan, Indonesian Borneo, until a few years ago.

Experts said the Sumatran rhino population in the region is about 15. The species is threatened with extinction.

According to the International Rhino Foundation, only 100 Sumatran rhinos remain. The foundation said on its website that in Africa alone, poachers killed three or more rhinos per day last year due to demand for the horn on the black market.

“Our hearts are saddened by this devastating news from Kalimantan. There are many lessons to be learned from this event,” the International Rhino Foundation said in a statement.

Wildlife charity WWF has said it is saddened by news the animal had died.

While the cause of death was still being determined, the conservation group said there were indications the rhino was suffering from a severe infection caused by snares from an earlier poaching attempt.

Nyoman Iswarayoga, spokesman for World Wildlife Fund, said an autopsy on the 10-year-old rhino will be performed to determine the cause of death.

Carlos Drews, director of the WWF International Global Species programme, said: “WWF is saddened by the news of the death of the Sumatran rhino found in Kalimantan. The hope we felt a few days ago was in celebration of the first live sighting of a rhino that was thought to be extinct in the Indonesian part of Borneo until recent surveys revealed footprints of this unique species.”

“Today, we feel despair over the loss of that same rhino. We now know that there are more Sumatran rhinos in this region and we will work to protect the remaining individuals. This was the first physical contact with the species in the area for over 40 years, we will make great efforts to make sure that it is not the last,” Guardian quoted Dews as saying.

Arnold Sitompul, WWF Indonesia conservation director, added that the indication the rhino was suffering infection as a result of poaching snares demonstrated the threats faced by the species.