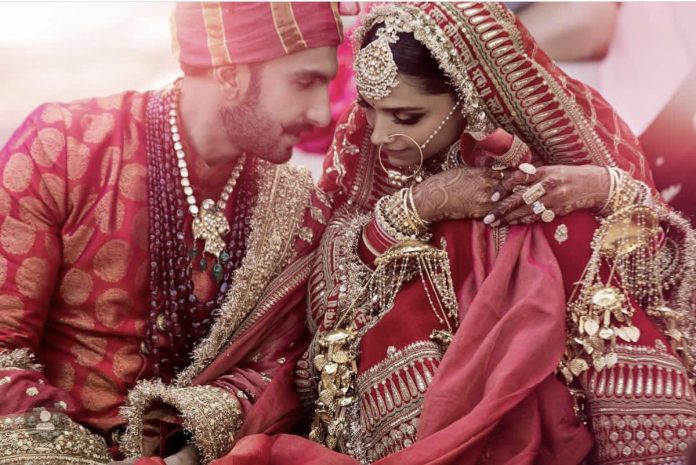 Mumbai: The hide and seek is over. Bollywood’s much-loved couple Deepika Padukone and Ranveer Singh, after two days of wedding ceremonies in the far and dreamy Lake Como setting in Italy, unveiled their first look as a married couple to the public on Thursday, immensely pleasing their army of fans.

Both Deepika and Ranveer shared two images — one each from their four-hour-long ceremony according to Konkani traditions on Wednesday and a North Indian style nuptial on Thursday.

In one picture, the two are laughing away, sharing a jovial moment during the Konkani wedding, and in another photograph from the celebration on Thursday they are all ears for each other. 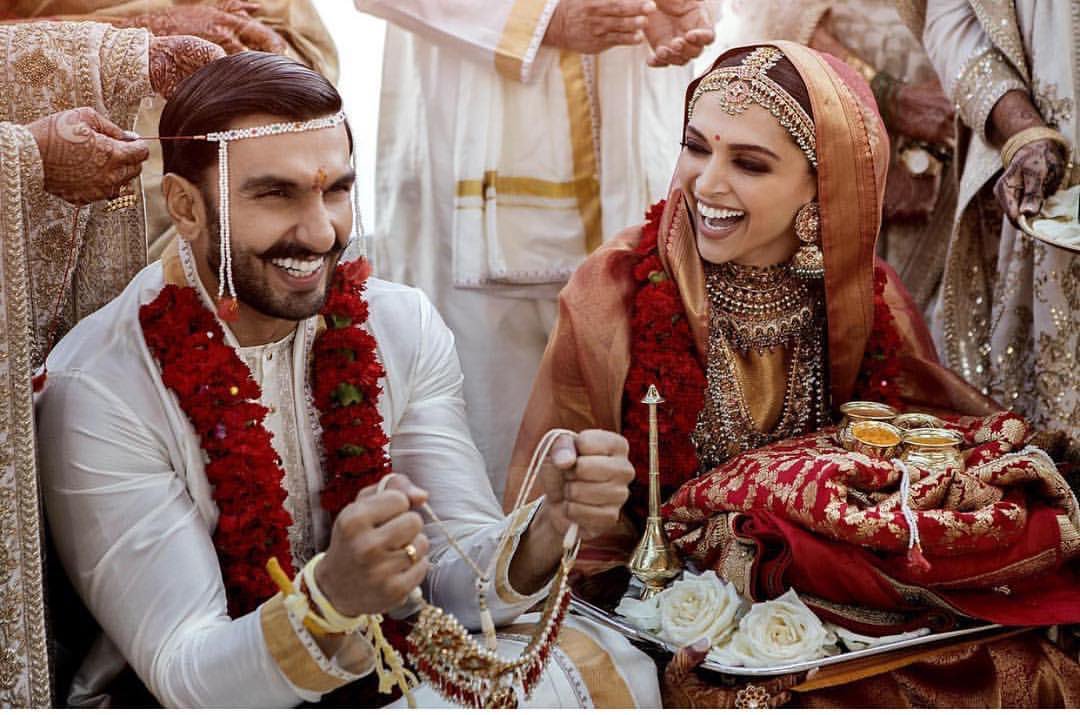 Deepika looks resplendent on both occasions dressed in ensembles rooted in tradition as she chose red and gold as her primary colours. Ranveer wore pristine white for the first ceremony, and was colour co-ordinated with Deepika for Day 2.

In a matter of 10 minutes of sharing the first pictures at around 8 p.m. on Thursday India time on Instagram, they jointly garnered over 4 lakh ‘likes’.

Social media users were pining for a glimpse into the very private celebrations, which marked the culmination of a six year-long love story which began on the sets of the 2013 film “Goliyon Ki Raasleela Ram-Leela”.

Unlike most celebrity weddings which keep fans engrossed with social media updates, the ‘no pictures, no phones, no drones policy’ of the actors’ grand destination wedding left the media and fans yearn for a glimpse of the couple or the celebrations.

Amit, a cousin of Deepika, a daughter of badminton ace Prakash Padukone, said it has been a “magical week, steeped purely in love” for the family.

“Fairytale union of the two most kind, beautiful souls. Ranveer, welcome to the family! You’ve dethroned me as filmiest, but I’ll cope. Deepika, never seen you happier; you deserve no less,” Amit tweeted.

That, apart from some long, wide angle shots and some hazy videos from the wedding celebrations, is all that people could get their eyes on.

The celebrations were as private as it could get. With a guest list of around 40, Deepika and Ranveer chose Northern Italy’s Lombardy region, a resort area known for its spectacular scenery as the backdrop for their wedding.

They were successful in hiding themselves from onlookers, using their umbrellas.

Mobile phones were not allowed outside people’s rooms and there were boats patrolling the lake for drones as part of the three-level security plan for the wedding.

Fondly called as DeepVeer by their fans, the star couple has also worked together in “Bajirao Mastani” and “Padmaavat” although they didn’t share screen space in the latter.

Before the two left for the wedding revelry to Italy last week, Deepika had a traditional puja at her Bengaluru residence while Ranveer had a ‘haldi’ ceremony at his Mumbai home.

Deepika and Ranveer exchanged rings on Monday evening in Italy. A more ‘desi’ touch to the celebrations came in with the ‘mehendi’ function on Tuesday afternoon, followed by a music-filled ‘sangeet’ the same evening.

Singer Harshdeep Kaur, along with Sanjoy Das, Bobby Pathak and Firoz Khan, added a musical touch to the ceremony.

Poles apart from each other in personality, Deepika and Ranveer’s off-screen camaraderie gave enough hints to their fans, the media and the film fraternity that love was brewing.

But they never confirmed their relationship until recently. They put to rest months of speculation about their nuptials with a social media announcement in October of their wedding dates.

“We thank you for all the love you have showered upon us over the years and seek your blessings as we embark on this incredible journey of love, loyalty friendship and togetherness,” they said.

Over the years, Deepika has been a bit more reserved than Ranveer in expressing her love openly, but the “Band Baaja Baaraat” actor has been uninhibited.

While they spoke a bit about their likes and dislikes about each other at a summit in the capital in October, it is only on “Koffee With Karan” that Deepika was a little more open about her relationship with Ranveer.

The couple will have a reception each in Bengaluru and Mumbai on November 21 and 28 respectively. And on December 1 there will be a separate celebration with the film fraternity.

They have urged their guests to direct gifts in the form of a donation to Deepika’s The Live Love Laugh Foundation, which works towards spreading awareness on mental health.

Anupam Kher against special screening of ‘The Accidental Prime Minister’