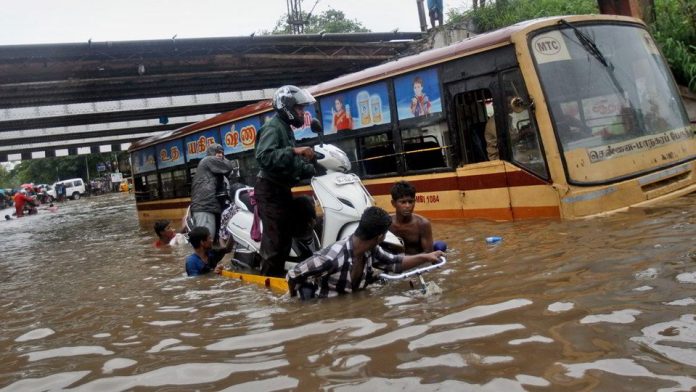 Chennai/New Delhi, Dec 2 (IANS) Life in the Tamil Nadu capital was crippled on Wednesday as fresh downpour worsened an already disastrous flood situation, posing danger to thousands of people in low-lying areas. The financial loss may exceed Rs.15,000 crore, an industry lobby body said, as weather forecasting agencies predicted heavy rain to continue for at least the next two days.

Soldiers joined the rescue and relief work and more troops were on their way from Bengaluru to Chennai, the sprawling southern metropolis with over 4.6 million residents.

The unprecedented rains, the worst in 100 years, have battered Tamil Nadu’s northern districts such as Chennai, Tiruvallur, Kanchipuram and Cuddalore. In the last spell of rains, around 180 people had died in the four districts. 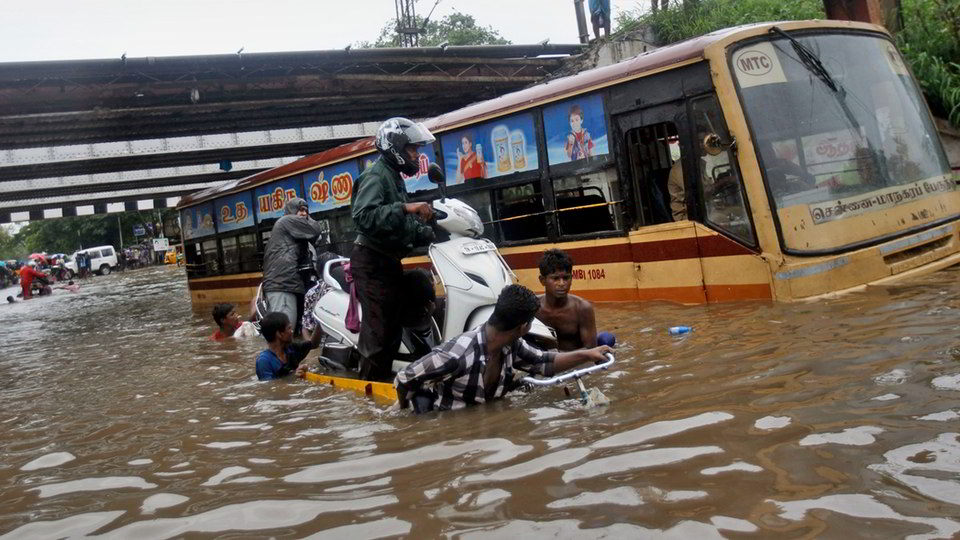 Union Urban Development Minister M. Venkaiah Naidu said in New Delhi that the situation was “unheard of and unprecedented”, and promised all help to the beleaguered city and other areas.

A joint statement by the India Meteorological Department (IMD) and Skymet, a private weather forecasting agency said: “Tamil Nadu’s weather is under observation for the next 72 hours as the rain in the next 48 hours is going to be comparatively heavy.”

The financial loss may exceed Rs.15,000 crore, the Associated Chambers of Commerce and Industry of India (Assocham) said, while the state government put the total loss at Rs.8,481 crore.

The government said 72,119 people were housed in 432 relief camps, but thousands of passengers were still stranded at the Chennai airport and railway stations.

Electricity supply snapped in many areas. Telephone services too were hit.

With schools and colleges shut, and vast areas under water, most buses went off the roads and suburban train services were suspended.

Auto-rickshaws and taxis plied in some parts of Chennai but the operators fleeced commuters. A taxi driver reportedly charged Rs.4,500 to ferry three people from the airport to a hotel.

The Indian Coast Guard has shifted over 150 marooned people in Chennai, and over 1,000 people stranded at different locations were provided with food cooked on board Coast Guard ships.

Unlike in the past, upmarket localities like Shastri Nagar, Anna Nagar, Alwarpet and Mylapore were flooded. With the river overflowing, traffic over the Adayar bridge near Saidapet was closed for safety.

Surplus water from Poondi reservoir, which supplies water to Chennai, was released, causing more misery. Water level in the Chembarambakkam, Puzhal and Sholavaram reservoirs have also touched the danger mark.

Marriage may not be the first thing on your mind when your life has been disrupted by a torrential downpour — and there is water everywhere. However, braving heavy rain and flooding, many couples across the state capital entered into wedlock on Wednesday, an auspicious day for weddings.

“Today is an auspicious day for marriages. In our hall, a wedding was conducted as planned,” K.M. Kannan, manager of the A.V.M. Rajeshwari Kalyana Mandapam, told IANS.

In a lighter vein, he said “perhaps the couples who get married must have eaten lots of raw rice in their childhood”, referring to an old saying that those who eat raw rice as children will face heavy rains on their wedding day.

The Southern Railway cancelled 13 trains out of Egmore station and four trains from Chennai Central. Ten trains from other stations too were axed.

Several private establishments declared a holiday. The government on Wednesday issued an advisory to private sector undertakings to allow their employees to take leave or permit them to work from home on Thursday and Friday.

The Hindu and Business Standard newspapers did not come out on Wednesday due to heavy rains. The Hindu will be published on Thursday, a newspaper employee said.

Police have meanwhile blocked the wide stretch of Chennai beach as a precaution.

According to officials, the Chennai airport has been shut till Thursday morning and all flights have been cancelled after the runway got flooded.

Movie theatres and malls have come to the rescue of the flood-affected. Hotels were swamped by frantic calls from residents and visitors for accommodation.

In many areas, people made makeshift boats by tying up empty barrels to reach safer places.

Delhi Chief Minister Arvind Kejriwal on Wednesday offered all resources at his disposal towards flood relief, while Bihar’s Deputy Chief Minister Tejaswi Yadav announced that he will donate his first salary to the victims.

Winnipeg couple ask to go ahead to vote because wife has...