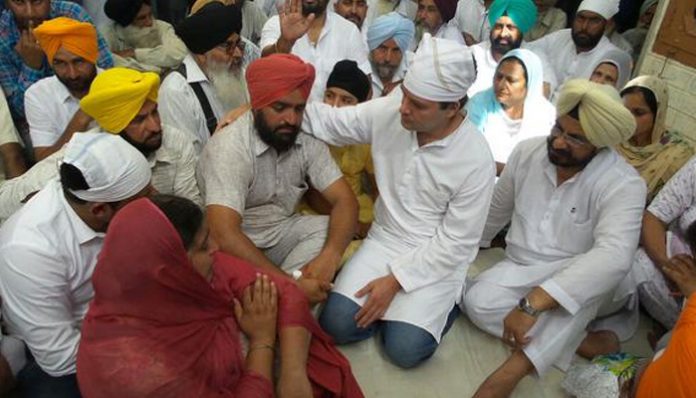 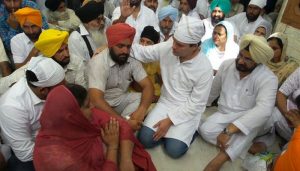 Chandigarh, June 18 (IANS) Congress vice president Rahul Gandhi on Thursday met the family of a debt-ridden farmer who committed suicide in a Punjab village last week after his crops were destroyed by unseasonal rain. The Shiromani Akali Dal urged Gandhi not to play politics over the misery of farmers.

After staying with the bereaved family in Dadumajra village near Chunni Kalan in Fatehgarh Sahib district for nearly 15 minutes, Gandhi headed to the picturesque hill station of Kasauli in Himachal Pradesh to meet his elderly aunt.

Taking a jibe at Gandhi, Punjab’s ruling Shiromani Akali Dal (SAD) said “his cavalier attitude can be seen from the fact that he stopped to visit the farmer family while on his way to Kasuali to celebrate his birthday tomorrow”.

Surjit Singh, a 60-year-old debt-ridden farmer, who had met the Congress vice president on April 28 after his crops were destroyed by unseasonal rain, committed suicide on June 10 by consuming poison.

Clad in a white kurta and blue jeans, Gandhi spent time with the family of the farmer and hugged the widow.

“Rahul ji came here specially to attend the ‘bhog’ of my father. He promised to raise the plight of farmers in the country,” his son Kulwinder Singh told reporters.

Gandhi had on April 28 taken his fight for the farmers and had boarded a train from Delhi to Ambala in Haryana to see their condition. He also visited Punjab to look at the situation of the farmers.

The Akali Dal urged Gandhi not to play politics over the misery of farmers.

In a statement here, party general secretary Maheshinder Singh Grewal urged Gandhi to introspect on his own failure to mitigate the sufferings of farmer Surjit Singh who had approached him for help before committing suicide.

Official sources said that after meeting the farmer, Gandhi reached Kasauli, some 60 km from here, to meet his aunt Shobha Nehru, who was married to Jawaharlal Nehru’s cousin B.K. Nehru.

Born in Budapest in Hungary, Shobha Nehru married into the Nehru family in 1935, after she met B.K. Nehru at Oxford University as a student.

B.K. Nehru, one of India’s most distinguished civil servants of post-independent India, died on October 31, 2001 at the age of 92.