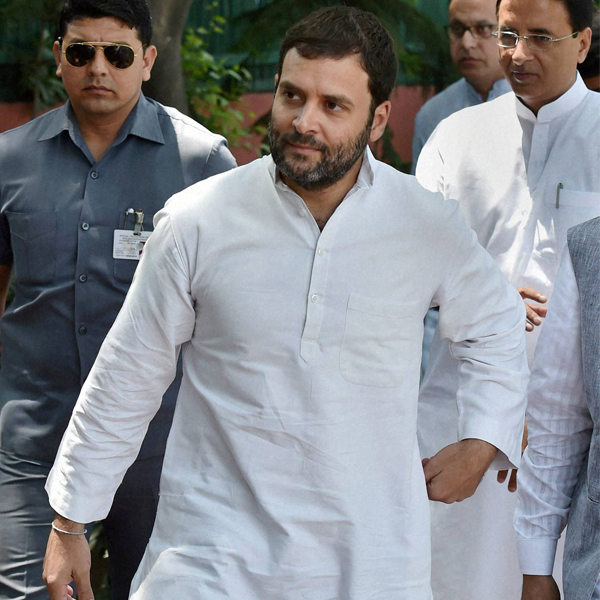 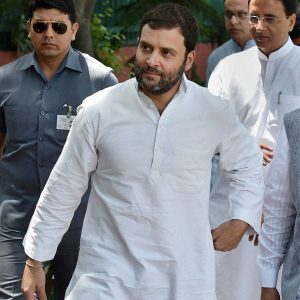 Addressing a rally at the Jantar Mantar here at the end of his Kisan Yatra across election-bound Uttar Pradesh, he also accused Modi of not fulfilling his promises to people made during the 2014 Lok Sabha polls.

But the party’s grand show to mark the end of Gandhi’s 26-day yatra was overshadowed by factionalism, with the party’s Haryana unit chief Ashok Tanwar injured in clash between his supporters and those of former Chief Minister Bhupinder Singh Hooda.

Tanwar was taken to RML Hospital and initially kept in the ICU. Doctors later said he is out of danger.

Gandhi visited Tanwar in the hospital. General Secretary Kamal Nath, who is incharge of Haryana, also visited the hospital and said legal and disciplinary action will be taken against those found guilty. He said Congress president Sonia Gandhi had taken a dim view of the clash, which took place near a meeting point on the way to the rally venue at Jantar Mantar.

At the rally, Gandhi made a brief but aggressive speech in which he repeatedly attacked Modi.

Modi, he said, was taking political mileage from the surgical strikes the army conducted in Pakistani territory and the sacrifices of soldiers in Jammu and Kashmir.

“Unki dalali kar rahe ho… Yeh bilkul ghalat hai… Hindustan ki sena ne Hindustan ka kaam kiya, aap apna kaam keejiye… (You are trading on them. This is totally wrong… The Indian Army did its job for India, you do your work),” he thundered.

The Indian Army carried out surgical strikes on September 29 against terrorist launch pads across the Line of Control in the wake of a terror attack that left 19 soldiers dead in Jammu and Kashmir.

Asking Modi to do justice to the people of the country, Gandhi said that the Prime Minister has only tried to divide the country.

“I want to tell Narendra Modi ji, to the RSS people, and the BJP that this country wants justice from you, and your responsibility is to give justice.”

“You asked us what did we do in the past 70 years. I’ll tell you today, what we did. We gave justice to the people. We respected the insaaf ka tarazu (scales of justice),” he said.

He said the Bharatiya Janata Party had promised the farmers best prices and implementation of the M.S. Swaminathan report, “but you didn’t fulfil that as well.”

“You said you’ll give employment to 2 crore unemployed youth every year, you didn’t do that,” said Gandhi, who reached here after starting the last leg of his yatra from Meerut in the morning.

His yatra was planned by the party as a major reach out to farmers of Uttar Pradesh, where the Congress has been out of power for over two decades now, ahead of assembly polls expected to take place early next year.

The party, which intends to target both the BJP-led central and the state’s Samajwadi Party governments over farmers’ plight, plans to hand over nearly two crores petitions from them, making demands including that of loan waivers.