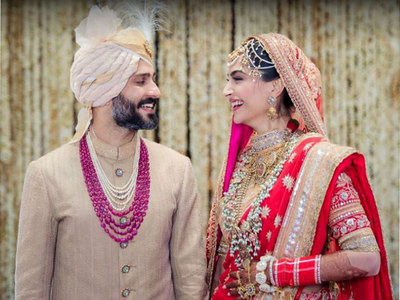 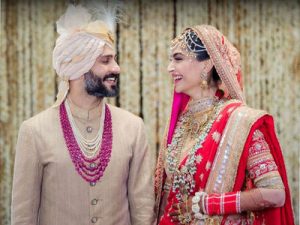 Mumbai: Actress Sonam Kapoor, who has earned the ‘fashionista’ tag in Bollywood with her experimental taste, chose a bright red lehenga with heavy jewellery for her wedding day as she tied the knot with long-time beau Anand Ahuja at a traditional Anand Karaj ceremony here on Tuesday morning.

Sonam wore a lotus-motif ensemble by designer Anuradha Vakil and looked every bit the Punjabi bride with her hands adorned by a deep maroon colour of henna, both wrists full of the ‘chooda’ and ‘kaleere’. She wore a statement maatha-patti for the Sikh wedding rituals.

The groom, a Delhi-based businessman, too looked dapper in a Raghavendra Rathore creation, a beige sherwani. He paired his sherwani with a beige and cream ‘saafa’ along with pearl and ruby strings.

The wedding took place at Sonam’s aunt’s place in Bandra here, with a slew of close family and friends of the couple in attendance.

The wedding proceedings were closely guarded as even Sonam arrived at the venue in a car with curtains hiding her look from the media. 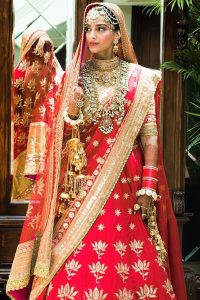 Later, an official photograph of the actress in her bridal avatar, as well as another one featuring the happy couple, were released. However, curious fans of the actress were filled in with inside photographs and video snippets via social media.

A short video showcasing Sonam walking the aisle saw the actress being accompanied by her brothers, led by Harshvardhan and cousin Arjun.

Other family members Boney Kapoor, Sanjay Kapoor and Maheep Kapoor too were present for the occasion.

Her performance in “Neerja” won her a Special Mention at the National Film Awards.

Sonam is known for her unique but impeccable taste in fashion and is known to be quite a trendsetter.

Before what seems like bringing red back in fashion with her bridal outfit on Tuesday, Sonam chose to go with subtle colours for her pre-wedding ceremonies.

For her mehendi function on Sunday, she chose a peach and grey sharara ensemble by Vakil, and for her grand sangeet celebrations on Monday, she was elegance personified in a heavy ivory lehenga by Abu Janu-Sandeep Khosla.

The newlywed will make an appearance together for the media on Tuesday evening at a grand reception party at The Leela here.