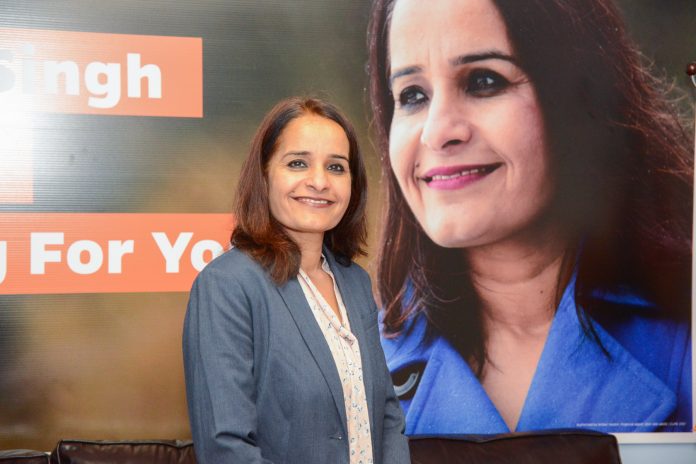 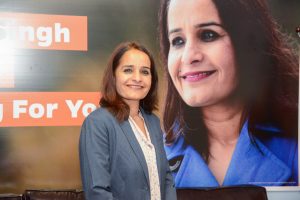 Equipped with a degree in Psychology, Rachna Singh immigrated to Canada in 2001 along with her husband and son, and found work with alcohol and drug services as a counsellor and as a counsellor for women fleeing violence. She spoke with Ray Hudson about her path to the present, where she stands as the NDP candidate for Surrey-Green Timbers.

Rachna Singh: In 2001 the Liberals had just come to power. We only had two MLAs. I started working with a very vulnerable population and I saw first-hand the funding cuts for the transition houses, the women’s center, the alcohol and drug programs.

I come from a very political family background in India, so it was natural for me to get involved in politics here, I joined the NDP in 2002, working at the grass-roots level going to the media to talk about all the funding cuts, and make people aware of what was happening. I did that for ten years, getting more involved. I worked on campaigns for Jagrup Brar in 2004 and Harry Bains in 2005. I came to know Sue Hammell after she was elected in 2005 because there was a lot of violence against women, and East Indian women, at that time in Surrey. Sue was a huge advocate for women and a really good role model. She encouraged me to get involved, although it was never in my mind to run for MLA. Nobody thought that Sue Hammell would step down so suddenly, but when it happened, people told me that I should go ahead.

Ray Hudson: What are the people in Green Timbers concerned about?

Rachna Singh: A lot of people are struggling, especially with all the rising costs they are facing. A lot of people are frustrated over the BC Hydro increases, the tolls, wages aren’t keeping pace with the cost of living, and the cost of housing. A lot of people are living in basement suites.  Even the people who own their own homes are worried about affordability for their children.   People are frustrated with the school system and the over-crowded classrooms. After fourteen years of the Liberals fighting with the students, and the supreme court decision, they claim that the kids are important.  Why did they need a supreme court ruling to realize that?
I hear a lot about the congestion at Surrey Memorial Hospital. The government says it’s the most booming economy the country has, so if we are doing so well, why are people waiting ten and twelve hours in ER, and sometimes ending up in beds in the hallways?

We are looking at other options beyond just building new hospitals. If we had community medical clinics around the community, with longer hours, that would be far more accessible to people, and alleviate the backups at the ER. If I break my arm, I need to have it seen to and set in a cast. But that doesn’t mean I have to go to emergency. That should only be for much more serious injuries or illnesses.

Finally, people are concerned about jobs. How can they get work that pays a living wage without needing more than one job? The Liberals have been saying that we have the lowest number of unemployed and they claim they are creating more jobs. But most of the jobs are precarious jobs, part time and casual jobs that people can’t survive on. In that regard the minimum wage is an issue that keeps coming up over and over. We plan to increase the minimum wage. The research shows that when the minimum wage is increased, people have more money in their pockets which goes back into the community as it is spent. Any increases to the minimum wage will be done in increments over the four years of the government’s term, to top out at $15.

There is a definite concern about the impact of raising the minimum wage on small business.  We think the Liberals have neglected that sector as well so to help we will reduce the small business tax by one-half percent, to help them pay the increased minimum wages.

Ray Hudson: Are people raising a concern about marijuana when you’re campaigning?

Rachna Singh: Generally not. It’s public safety, and gang violence in particular, that is a much bigger concern, especially in the South Asian community. We want to invest in programs that will mentor the kids to take them away from gang life. We have to prevent them going there in the first place.  It’s much harder getting them out. This is where the focus should be: prevention, recovery and then ensure that the courts are moving quickly enough and strong enough to be a deterrent.
We plan to create 96 thousand jobs with all the construction of schools, roads and hospitals that will happen. Those jobs will be well-paid jobs. That is our promise.