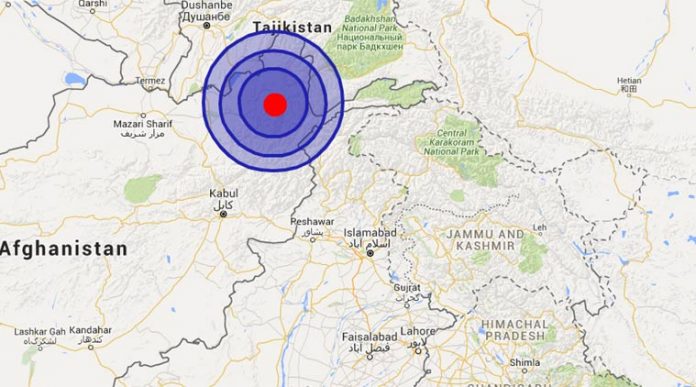 Hundreds of thousands of people fled out of their houses and offices in Delhi and adjoining areas as well as in parts of Jammu and Kashmir, Uttar Pradesh, Rajasthan, Himachal Pradesh, Punjab and Haryana. There were no reports of casualties but there was major damage to property in Kashmir.

The tremors, around 2.40 p.m., were distinctly felt for 30-40 seconds, shaking high-rise buildings across north India. The epicentre of the quake lay in Jarm in Afghanistan, 256 km northeast of Kabul.

Most multi-storey public and private buildings in Srinagar, the summer capital of Jammu and Kashmir, suffered huge cracks. Dozens of houses and school buildings collapsed in southern and central parts of the Kashmir Valley, officials and residents said.

Traffic came to a halt as vehicles started swinging on shaking roads in the valley. A traffic flyover in Srinagar developed cracks.

“Heard about strong earthquake in Afghanistan-Pakistan region whose tremors have been felt in parts of India. I pray for everyone’s safety,” he tweeted. “We stand ready for assistance where required, including Afghanistan and Pakistan.”

Modi followed it up with telephonic conversations with President Ghani, who briefed him about the deaths and destruction in Afghanistan. Modi also spoke to Sharif and offered “all possible assistance” to Pakistan.

As the tremors began, Delhi Metro immediately halted its services all across the capital and in the neighbouring regions of Gurgaon in Haryana and Noida in Uttar Pradesh. Jaipur Metro followed suit.

A Delhi Metro spokesman told IANS that the services were resumed after officials did a quick check for possible damage to infrastructure and rail tracks.

The worst hit were Afghanistan and Pakistan. At least 22 people were killed in Afghanistan and some 130 injured. The more populous districts of Pakistan suffered more, leaving 130 people dead and hundreds injured.

The quake was felt in most of the northern parts of Pakistan including major cities like Islamabad, Rawalpindi, Lahore, Sargodha and Kohat, Dawn newspaper and Pakistani officials said.

The deaths and destruction covered a wide arc, from the areas bordering Pakistan to the Kashmir and Punjab regions near India.

At least 200 people were admitted to a hospital in Swat and another 100 in a Peshawar hospital, officials said.

Dunya News said a part of Bala Hissar fort in Peshawar had been damaged.

Pakistan directed its army to carry out immediate rescue work in affected areas without waiting for formal orders.

Military spokesman Maj. Gen. Asim Bajwa said army teams had been sent out for a quick assessment of earthquake damages across the country. All command military hospitals were placed on high alert.