Dr. Terry Waterhouse is Surrey’s Public Safety Strategy Director. But the road that brought him here has been one designed for his new position, long before it was even thought of.  Stops along the way include teaching at the secondary school level, wearing the uniform of the Vancouver Police Department working on the street and as a school liaison officer working with at-risk kids. He has worked with the United Nations and with justice agencies from Kosovo, Ethiopia and Vietnam, was director for the Centre for Safe Schools and Communities and an instructor at the University of the Fraser Valley, and Chief Safety Officer at Simon Fraser University. When Surrey created the position of Public Safety Strategy, he knew he was the man for the task.

Three months into the job, he spoke with Ray Hudson about his desire to take on developing the Public Safety Strategy for Surrey.

Hudson: What was so attractive about this job that brought you to Surrey?

Waterhouse: The City created the position of Public Safety Strategy Director of as part of the commitment of demonstrating the importance of the public safety issue and to move it forward after many years of the Crime Reduction Strategy. They wanted to both broaden the mandate of it, and move it into a more clearly strategic process. Let’s determine where we’re at and where we want to go. Let’s put the initiatives and the targets in place to help us move to being the city that we want to be.
Several years ago the city made a commitment to the Sustainability Charter, which is really cutting across the many aspects of city operations and is imbedded in everything that we do now. It’s under the umbrella of sustainability and how we are building a sustainable community.  Often, when people think about sustainability they think about ecology, but it’s also about the socio-cultural issues, and the economic issues.  So under that socio-cultural pillar the sustainability charter has one of the theme areas around public safety and it’s an important leg. So given the importance of that, the Mayor and Council decided they would create a senior position at the city, to integrate all of the various aspects of Public Safety in a coordinated collaborative fashion, to create a rigorous public safety strategy that looked at all aspects of public safety, I was immediately drawn to it.

Hudson: You mentioned working in a coordinated collaborative fashion, yet the city has grown so dramatically over a very short period of time, it must be difficult to get everyone working together. How do you characterize the public safety gaps and how do you see bridging them and bringing all the agencies concerned with public safety into a closer working relationship?

Waterhouse: I would say the gaps are pretty minimal, and becoming even less so.  When we talk about public safety we define it as a table where we bring all of those key players together. If we talk about the police or fire for example, a major piece of their mandate is dealing with public safety. Other departments have core mandates other than public safety, but in fact, the libraries, parks, recreation and culture, engineering and our bylaw department, all city operations, do have a commitment, albeit perhaps less obvious, to public safety.
To coordinate that we have two public safety ‘tables’ with staff.  The first table is at the senior level, where we have a Public Safety Leadership Group, which brings all of us together around public safety. When we’re at that table we’re looking at the overlaps we have and how we all work together.  The second table is a large working group which brings senior staff from each of the departments to the public safety table where we talk about public safety strategy. This has, in a relatively short period, created a place of commonality, where everyone that comes to the table has a clear sense of mission, knows exactly what their role is, and how they contribute.   It allows us, when we have conversations about what gaps there are, to frame it around what we’re already doing, how is it working, and what our renewed commitment to that is. This is contrary to framing the question in terms of gaps and problems and creates a collaborative commitment to addressing the issue as opposed to asking ‘why aren’t we doing better’ or blame finding. What I was drawn to and intrigued by with Surrey, was that collaborative dynamic.  I joined a team where that approach already existed, and it has allowed us tocreate a commitment to public safety because the pieces are already there and allows us to move internally to be sure we’ve got the processes in place to be effective and efficient relatively quickly.

Hudson: What are the main things that you see as being critical to your portfolio on public safety?

Waterhouse: We are looking at developing an integrated and collaborative, evidence-based, approach to addressing issues of crime reduction and prevention, issues of personal safety, personal safe places around the community, particularly public gathering locations. It includes road safety and ensures that our emergency and disaster preparation is top notch. It also includes responding to persistent social challenges including homelessness, mental health, addictions, and so on.

Hudson: What role do you see the business community playing at the ‘table’ as you call it, as a participant in that public safety readiness?

Waterhouse: Public safety is core to the business community and that is core to our public safety strategy. There are three Business Improvement Associations (BIA), in the City Centre, Newton and Cloverdale.  Key to their mandate is public safety.  In fact it’s why when BIAs first started to develop a few decades ago, it was primarily around that notion of public safety and creating safe places for people to do business. There is research out there that actually shows that BIAs, when they work in strategic and collaborative ways, actually are really significant partners in making a difference in public safety.
I’ve also been to the Board of Trade a couple of times, to the justice committee meetings where I have spoken, so we’ve had those conversations, and we’ll talk at those multiple levels about how the business community in all its various ways, is part of public safety, and how we ensure that we’re collaborating in as many ways as we can.
One of the other pieces that is important, and I think innovative, is the Surry Crime Society, where they mobilize three hundred, largely young people who are committed to public safety, committed to volunteerism and committed to making a difference. They’re also integrated into a number of different things that are happening, for example in Newton, there’s a partnership there that includes the BIA, the RCMP, the Crime Prevention Society, our Bylaw Department, and they’re all engaged in that together.

Hudson: In the event of a major disaster such as the Cascadia quake, what is your role in such a circumstance?

Waterhouse: From an operational perspective the Fire Service is the lead agency on emergency preparedness and disaster recovery, so exactly what we’ll do from a strategy perspective with emergency planning, we haven’t defined right now. We have an operational strategy in place and we’ll define my role in this over time.

Hudson: The recent epidemic of street shootings is the crisis at the moment.  Does that come to your office at all?

Waterhouse: The direct response to this violence is an operational issue for the RCMP and they have their operational independence to do that. The role of my office is more of a coordinated response to the phenomenon.  What can we do to try to prevent it.  How do we build the kind of community in which we can cure the violence that is going on that leads to those incidents?

Hudson: Does your role also include identifying and finding the required resources for some of those shortfalls?

Hudson: There are some aspects of your role that are obvious, but are there roles you have that would surprise people?

Waterhouse: The one that sometimes raises eyebrows is the issue of road safety.  Lead by our Engineering department and the RCMP, we are working through the Public Safety table, looking at road and pedestrian safety and finding out how we can use the real time intelligence and information we have through the Traffic Management Centre as well as other forms of data to improve that.  Some improvements have already happened. Because we can time the traffic lights to enhance traffic flow we’ve been able to innovatively test the use of light systems at heavy pedestrian areas, so the lights will change when there’s an accumulation of pedestrians at a certain area. And if a high pedestrian area is also a school zone on a high traffic area, that adds a layer of complexity, but there are things, using the technology to change that dynamic. The possibilities are enormous.  So that is absolutely a part of personal safety.

Hudson: Do you see a role at the regional level?

Waterhouse: It’s early days, and I’m lazar focused on the City of Surrey. But they are watching and I’ve already had conversations with the folks in Richmond, but I’ve got so much to do right now I’ll be keeping my eyes down for now. It will be interesting to see how the relationships beyond the city boundaries happen over the long term. 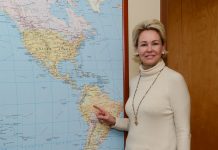 The Zika Virus Explosion, A Perspective  – by Ray Hudson