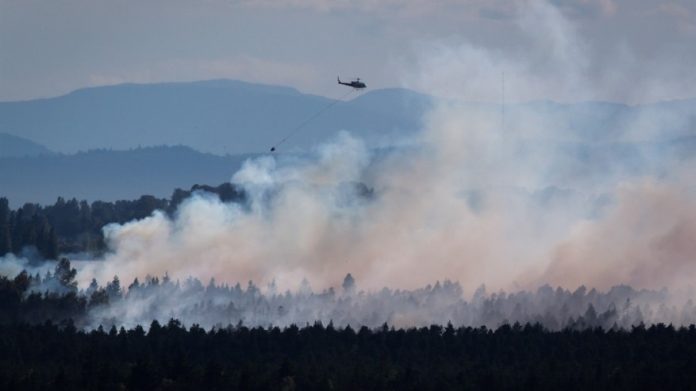 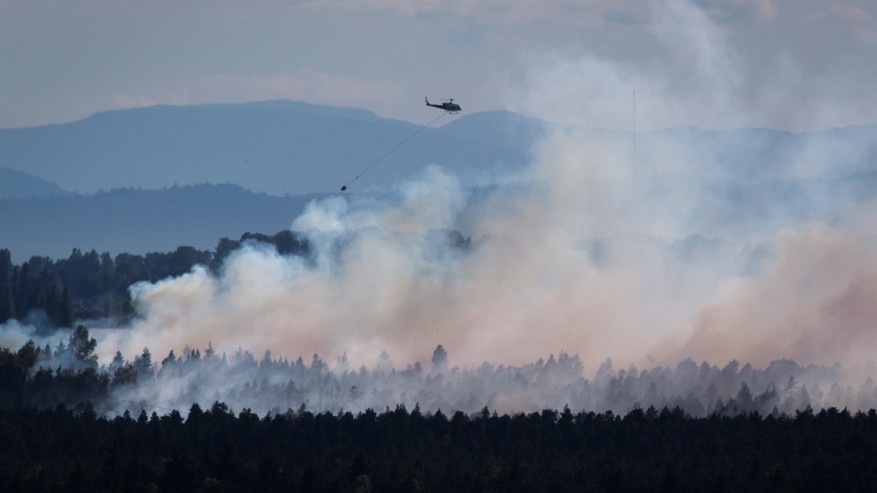 A fire burning in a suburban Vancouver conservation area has jumped the highway, forcing roads to close and businesses to be evacuated.
The blaze in Burns Bog was first reported around 11:40 a.m. Sunday and gusting winds fuelled its growth throughout the afternoon, said Delta, B.C., fire chief Dan Copeland.
Delta police issued a statement late Sunday night that said the fire had grown to between 55 and 70 hectares in size, and was expected to take at least a week to extinguish.
The statement added that a Delta firefighter had been hospitalized due to a medical condition aggravated by the environment at the scene of the fire.
Copeland acknowledged that the blaze was giving crews a hard time.
“We were struggling. We had heavy winds this afternoon,” he said. “They were a bit unpredictable. They were shifting on us and it was quite a dynamic fire.”
Smoke appeared to have drifted into downtown Vancouver by early Monday morning, causing a heavy, acrid smell in the air.
Provincial crews were called in to help early Sunday afternoon. Donna MacPherson with the Coastal Fire Centre said about 26 provincial firefighters, and several airtankers and helicopters were assisting.
Other fire departments in the region, including from Metro Vancouver, also provided backup as the flames spread, eventually jumping Highway 17 and forcing police to evacuate an industrial area.
Delta police chief Neil Dubord said the evacuation was a precautionary measure.
“Certainly everyone is concerned about their businesses, but at this point in time, we don’t feel that there’s any threat to the businesses,” he said.
Police also closed Highway 17 between Highway 99 and the Highway 91 Connector, diverting traffic around the fire, and the Fraser River was temporarily closed to marine traffic so airtankers could scoop water.
Dubord said it was unclear whether the roads would reopen in time for rush hour traffic Monday morning.
There was no indication Sunday evening of what caused the fire, Copeland said.
The fire chief described the blaze as a grass fire, and said embers from large deciduous trees are falling, creating spot fires.
“It’s very dangerous,” Copeland said. “It’s very smoky.”
The geography of Burns Bog also presents a challenge for fire crews.
Located southeast of Vancouver, the 30-square-kilometre nature reserve is one of North America’s largest peat bogs, and the fire can get under the dry peat where it will burn out of sight.
“If a fire gets underground in that peat, it can run a long way and pop up somewhere else. So it’s a very major concern in that regard,” said Delta Mayor Lois Jackson.
It’s not the first time Jackson has witnessed a major fire in the area. She was mayor in 2005, when a blaze in Burns Bog grew to more than two square kilometres and took more than a week to put out.
The mayor said Sunday that she hasn’t had time to think about the previous blaze.
“We’re throwing everything we’ve got at this fire to get it out as soon as we can. Obviously it’s a very tricky fire to fight,” Jackson said.

Techie comes under train but manages to save a leg