Surrey: Or as Simon and Garfunkel put it, “Slow down, you move too fast…”

It was a dark and stormy morning at 168th Street and 63rd Avenue and four other locations in the city for the kick-off of the city’s Traffic Safety education and enforcement program.

RCMP Const. Sid Jordan was checking the speed of approaching cars from his position hidden from view behind a utility pole and even though the drivers had just passed a speed zone sign, a pole mounted illuminated speed reader board (which flashes how fast you’re going), and a Surrey Crime Prevention Speed Watch van, with yet another speed readout, the police were still finding speeding drivers .

“In Surrey, fourteen persons have been killed in traffic collisions so far this year,” said Surrey RCMP Corporal Scotty Schumann. “With the decreasing daylight hours and wet conditions, we want to remind drivers that we are out on the roads keeping drivers in check and to follow some simple rules to reduce their chances of being involved in a crash.”

Also braving the rain and the wind was Karen Klein, ICBC’s Road Safety Coordinator for Surrey and White Rock.

“Almost half of all crashes that result in injury or death involve high risk driving like speeding or failing to yield,” Klein said. “Every year, on average, 94 people are killed in speed-related crashes in BC so Project Swoop, a Surrey Program, is activated to drive the point home.”

Klein went on to explain that Project Swoop takes the whole day and a lot of volunteers, a lot of police members and auxiliaries, and focuses on the city’s high risk high crash areas for speeding.

“There’s an education component with the Speed Watch teams, the Speed Reader Boards (which displays your speed) and the enforcement component with the police,” Klein continued, “so when somebody travels through an area where we are located passing the Speed Zone sign, Speed Reader Board and the Speed Watch van, and still doesn’t change their behavior and slow their driving down, there will likely be a police officer who will step off the curb and write them a ticket.” 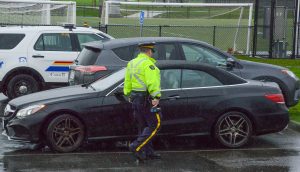 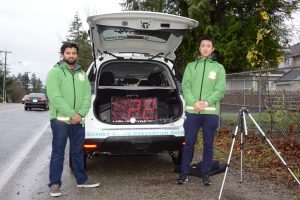 The City of Surrey will be enhancing its Speed Reader Board Program in the coming year as the boards are proving effective at slowing down drivers and raising awareness around the issue of speeding.

“We want to encourage all drivers in Surrey to travel at safe speeds because it’s everyone’s responsibility to help keep our roads safe,” said Jaime Boan, City of Surrey Manager of Transportation.

So read and heed the speed signs, save a hundred or so dollars and get to where you’re going without stopping by the hospital first.