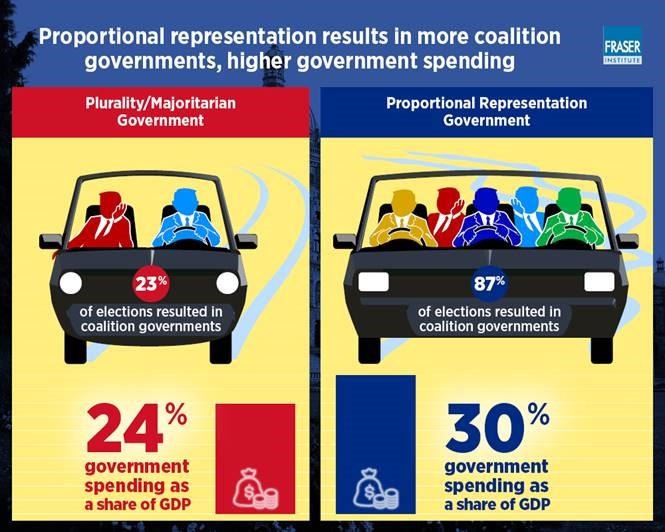 Next week, voters will receive mail-in ballots for this fall’s referendum on electoral reform—the third in 15 years—to decide whether or not B.C. should switch from its current “first-past-the-post” voting system to a proportional representation (PR) system.

“Coalition governments—a staple of PR systems—regularly have to secure smaller, niche parties by funding their pet policy projects, which means more expensive government paid for by taxpayers,” said Lydia Miljan, Fraser Institute senior fellow, associate professor of political science at the University of Windsor and co-author of The Consequences of Electoral Reform in British Columbia.

Based on election data from 26 countries between 2004 and 2015 (the most recent year of comparable data), the study—the fourth in a series on electoral reform in British Columbia—finds the average government spending of countries with PR electoral systems is 30.3 per cent of GDP compared to 23.7 per cent in countries with plurality or majoritarian election rules (including first-past-the-post).

“Before British Columbians decide how they want to elect members to the legislature, they should be aware of the consequences of any new voting system.”