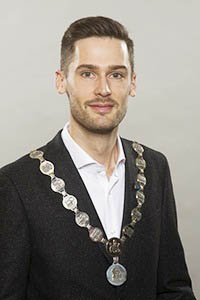 Port Moody: The British Columbia Prosecution Service says the mayor of Port Moody has been charged with sexual assault.

The service says in a statement that Robert Vagramov is alleged to have committed the assault in Coquitlam in 2015.

The service says special prosecutor Michael Klein was appointed in December to investigate the allegation because it was considered in the public interest to do so.

Klein approved the charge and Vagramov is to appear in Port Coquitlam provincial court on April 25.

The allegation has not been proven in court and Vagramov could not immediately be reached for comment.

The city’s communications department did not immediately respond to questions about whether he will remain in his position and continue to receive pay.

Vagramov was 28 when he was elected mayor last fall after serving one term on council.

He made headlines during the campaign when a 2014 video surfaced in which he asks a homeless man to chug a beer with him in exchange for a sandwich.

The appointment of a special prosecutor is intended to avoid any potential for real or perceived improper influence in the administration of justice.