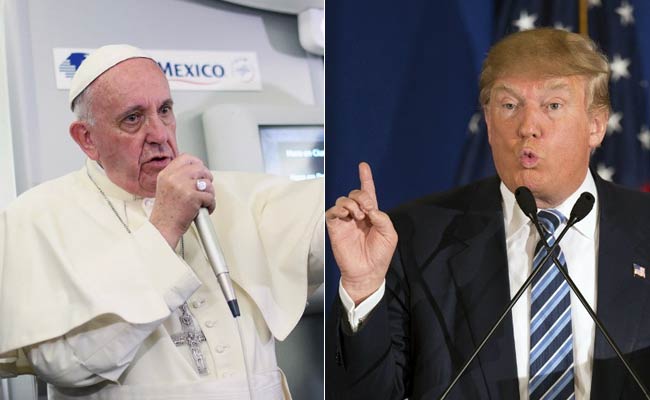 Mexico City, Feb 19 (IANS) Republican front-runner Donald Trump “is not Christian” if he calls for the deportation of undocumented immigrants and pledges to build a wall between the US and Mexico, Pope Francis said on Thursday.

The Pope, who was travelling back to Rome from Mexico, where he urged the US to address the “humanitarian crisis” on its southern border, did not tell American Catholics not to vote for Trump, CNN reported.

But Francis left little doubt where he stood on the polarizing issue of immigration reform.

“A person who thinks only about building walls, wherever they may be, and not building bridges, is not Christian. This is not the gospel,” the Pope told journalists who asked his opinion on Trump’s proposals to halt illegal immigration.

“No leader, especially a religious leader, should have the right to question another man’s religion or faith,” he said in statement. Trump added that the government in Mexico, where Francis spent the past five days, has “made many disparaging remarks about me to the Pope”.

“If and when the Vatican is attacked by IS, which as everyone knows is IS’ ultimate trophy, I can promise you that the Pope would have only wished and prayed that Donald Trump would have been president,” Trump said.

The tussle between Trump and Francis — two outsized personalities who seldom shy from speaking their minds — seems to have been building for some time. Before the Pope traveled to Mexico, Trump cast the pontiff as a political naif who “doesn’t understand the dangers” at the US-Mexican border.

Asked whether American Catholics should vote for Trump, Francis demurred.

“As far as what you said about whether I would advise to vote or not to vote, I am not going to get involved in that. I say only that this man is not Christian if he has said things like that,” he said.

The Pope appeared somewhat unaware of Trump’s exact stance on illegal immigration, though, saying that he would give him “the benefit of the doubt” until he had heard exactly what the billionaire businessman had said.