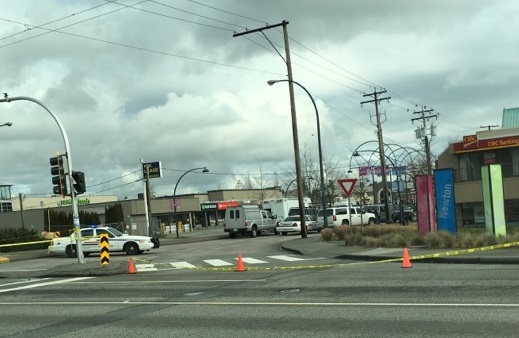 SURREY: Police have entered a Surrey, B.C., bank to determine if anyone is inside the building that was evacuated early Tuesday after reports of an attempted robbery.

RCMP Cpl. Scotty Schumann said staff and customers were outside by the time officers surrounded the bank following multiple calls about a robbery in progress at 8:30 a.m.

“We don’t know if there’s somebody still inside or not,” he said.

“Nobody saw the suspect leave with certainty, and we can’t see anybody through the windows, but that’s not to say they’re not hiding behind the counters or something or in the bathroom or watching TV in the lunchroom.”

Schumann said police have had no response after using loudspeakers to try and communicate with anyone in the building.

Businesses and roads were shut down to ensure public safety surrounding the TD Canada Trust branch at a shopping plaza on 72nd Avenue in the Newton area, he said.

Witnesses reported that the suspect indicated he had a weapon but police have not confirmed that one exists, Schumann said.

Patrol officers, detectives from the robbery section, emergency response teams and the dog unit were on the scene.

Yellow police tape blocked off every entrance to the bank, with cruisers parked at wide intervals. Officers were stationed on the rooftop of a nearby building.

Rhonda Kerr and her daughter were passing through a bus loop next to the bank around 8:30 a.m. when police began surrounding the area. They believed they spotted two people inside the bank peer through a large window, then quickly pull the blinds shut.

“It was plain as day. Everybody said the same thing _ ‘Did you see them in there?”’ said Kerr, sitting on a curb watching the building with other spectators.

“Then you saw all the police come in, cop car after cop car. Shortly after that we saw the SWAT team and command centre arrive and set up.”

Just before noon, Kerr said she heard police make announcements over a megaphone, saying, “The place is surrounded, come out with your hands up or we will come in.”

Tiarra Kerr said about 10 minutes later an officer made a second announcement, saying: “Somebody is calling the bank now. Please pick up the phone so we can establish communication so we can see what you need.”

Tyler Moses, 26, said he was on the bus early Tuesday when police suddenly flooded the area. Officers stopped his bus and he had to find his way to his destination by other means.

Moses returned to the block later in the morning and saw a truck release a police robot that trundled toward the bank. It had a camera mounted on top.

Taxi driver Amandeep Gill said he wasn’t able to get to any business Tuesday because the incident began as he was parked and waiting for customers.

“Is it really serious or is it nothing?” he asked. “I just want to be safe like every citizen does. We are with the police, but things are getting insane day after day.”

Local resident Naida Robinson said she’s dismayed that Newton is the spotlight again because of crime.

“I don’t think anybody’s going to be surprised. (I’m) disappointed that it’s another one of those things that Newton’s going to be in the news again.”

A woman who works at a nearby store and did not wish to give her name said officers came by and told her to stay away from the area.

Another employee at a business about a block from the bank said police would not allow her to enter her workplace and that she went in through a back door.

Two suspects involved in assault and robbery on a bus identified...