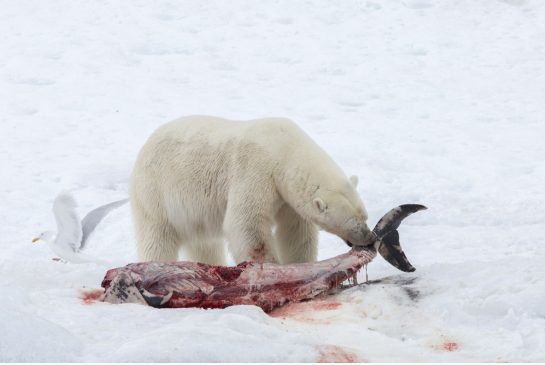 London, June 15 (IANS) A polar bear was spotted preying on a white-beaked dolphin carcass that had been trapped in the ice in Svalbard, a group of Norwegian islands in the Arctic Ocean.

Thanks to global warming these polar bears are fast adapting to new milieu and are now preying on new species, who primarily feed on ringed and bearded seals.

In April 2014, a male polar bear with a full belly was spotted near a recently devoured white-beaked dolphin, which could have weighed 54 to 308 kg and measured 5 to 9 feet long, the researchers said in a study published in the journal Polar Research.

The bear was also seen with another white-beaked dolphin’s carcass, which he might be saving for a later meal.

These dolphins rarely venture so far north in the Arctic; they prefer the sub-Arctic, which has less sea ice and more open water.

“If it had been a more usual sea-ice year, I do not think the dolphins would have been that far north in the spring,” lead author Jon Aars and a research scientist at the Norwegian Polar Institute was quoted as telling the Live Science.

The surface water temperature of the Arctic Ocean surrounding Svalbard has increased significantly over the past 45 years.

This results in decrease in summer sea-ice cover over the entire Arctic Ocean and extreme melting during 2007.

“The dolphins likely made their way to this northern area when the ice had melted, but were trapped when strong northerly wind packed drift ice onto the fjords.”