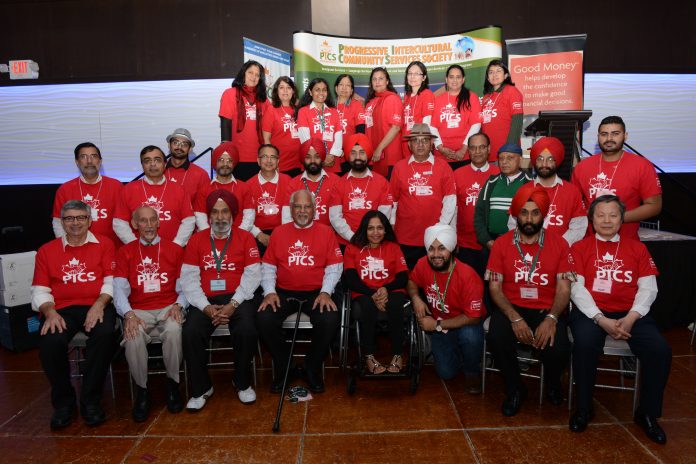 These job seekers were extremely successful in making connections with at least 70 exhibitors who were on their toes all day explaining their businesses, interviewing and accepting resumes.

“We are extremely pleased with the outcome of the Megajob Fair. Even after a gap of three years, PICS has been successful in garnering tremendous response both from the business community as well as the public at large”, said Charan Gill, CEO of PICS.

Satbir Cheema, Director, PICS Employment programs and Planning attributed the success of the event to all sponsors, supporters, exhibitors, the organizing team and volunteers who worked tirelessly to make this event a success.

“A special shout out to Vancity, without whose support this event wouldn’t have been a possibility. I would also like to thank our media sponsors Business in Vancouver and The Leader newspaper as well as our business supporter Surrey Board of Trade,” said Cheema.

PICS is extremely grateful to Nanak Foods who diligently served delicious snacks to all the attendees and to Subway and Taco Del Mar who graciously sponsored food for all staff, volunteers and exhibitors at the event.

The water at the event was sponsored by a former PICS client Mr. Faruq Patel who now owns Delta H2O To Go.

Some exciting door prizes were given at the event as well and these included a 49 inch Toshiba LED TV sponsored by Khalsa Credit unions, an iPAD Air sponsored by Sign Hub, a Samsung Galaxy Tab 4 donated by CWC immigration and an HP lap top sponsored by PICS Employment Programs.

The exhibitors at the event were extremely happy with the arrangements and have promised to be a part of PICS Mega Job Fair next year as well.

“We are happy that we were able to connect job seekers with prospective employers and we hope that next year will be even bigger and better,” said Mr. Gill.