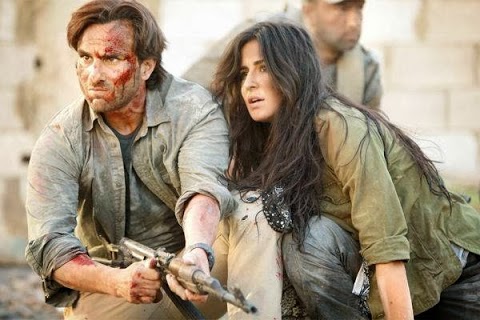 1962 it was when Pakistan first banned the export of Indian films to resurrect the fledging Lollywood industry and President Zia Ul Haque imposed it again in 2006 to protect the Pakistani film industry, however, the growing popularity of Bollywood films brought a new rejuvenation to the decaying cinema halls in Lahore & Karachi and successive films of SHAHRUKH, AAMIR & SALMAN KHAN brought a new glimmer of hope to the troubling cinema halls of Pakistan. As always, their films always drew massive crowds and in certain cases films like Shahrukh’s CHENNAI EXPRESS had to be held to promote Pakistani films during Eid festivals but many films came under the radar of Pakistani Censor Board and their sharpening knives, on one pretext or another, started banning Indian films and over the years, it seems, that number is growing. Neeraj Pandey’s BABY (2015) & Riteish Sidhwani’s BANGISTAN (2015) were banned recently and the latest casualty is Kabir Khan’s PHANTOM (2015), which was banned after LET commander Hafiz Sayeed complained to the Pakistani Supreme Court that the film was anti-Pakistan and after the Supreme Court ruling, the Pakistani Censor Board issued the ban and deprived Saif Ali Khan’s diminishing number of fans in Pakistan, a chance to see yet another film of Saif after the earlier ban on Saif’s home production of AGENT VINOD ( 2012 ). Well, the banned films in Pakistan are growing in number and here’s a list of all those banned films!

1. TERE BIN LADEN ( 2010 ) … though the film was Pakistan’s Ali Zafar launch in bollywood, it was too much to stomach for Pakistani Censore Board that Pakistan was sheltering Osama Bin Laden ( US forces killed him in Abotabaad,Pakistan years later ) and as expected, the film was banned in Pakistan! ( wondering what’ll happen to under production TERE BIN LADEN 2 ! ) !

2. LAHORE ( 2010 ) … FAROOQ SHAIKH’s last film won many national & international awards, however, the Pakistani censor board objected to many anti-Pakistan remarks in this sports film and hence the film was banned !

3. Milan Luthria’s THE DIRTY PICTURE ( 2011 ) … though it was based on Silk Smitha’s life story and a huge hit in India & abroad, the censors objected to the bold subject and duly banned it !

4. Aamir Khan’s DELHI BELLY ( 2011 ) … Aamir Khan is quite popular in Pakistan but the Censors objected to the under the belly humour and banned the film !
5. Bijoy Nambiar’s DAVID ( 2011 ) … Pakistani censor board found the film to be too bold for Pakistani audiences and banned it !
6. Kabir Khan’s EK THA TIGER ( 2012 ) … KATRINA KAIF is ISI agent in the film and that’s an absolute no and the film was BANNED !
7. Saif Ali Khan’s AGENT VINOD ( 2012 ) … The film showed the nexus between ISI agents & Taliban and their plot to bomb India and yes, the Pakistani Censor Board banned It !
8. Himesh & Akshay’s KHILADI 786 ( 2012 ) … 786 is revered by Moslems around the world and fearing riots & demonstrations, the film was banned in Pakistan !
9. RANJHAANA ( 2013 ) … Heroine SONAM KAPOOR falls in love with heroes DHANUSH & ABHAY DEOL, both Hindus in the film, and the Pakistani Censor Board banned it !
10. Vishal Bhardwaj’s HAIDER ( 2014 ) … Never mind that it’s the adaptation of Shakespeare’s HAMLET, the Pakistani censor board objected to the depiction of simmering Kashmir as part of India and banned it !
11. Neeraj Pandey’s BABY ( 2015 ) … Hailed by many as one of India’s finest in 2015, Pakistani censor board objected to the showing of Moslem clerics calling for Jehad in BABY and subsequently, the film was banned !
12. Riteish Sidhwani’s BANGISTAN ( 2015 ) … As per producer Farhan Akhtar, the film was a satire but the Pakistani censor board didn’t agree and the film was deemed as anti-Moslem!
…. and that brings us to the very latest PHANTOM ( 2015 ), hailed by many as the potential blockbuster of 2015 and with Kabir Khan enjoying the best time after the super success of BAJRANGI BHAIJAAN ( 2015 ), the recently announced ban has been chastised by many and certainly criticised by Saif & Kabir as it’s their second film to be banned in PAKISTAN ! 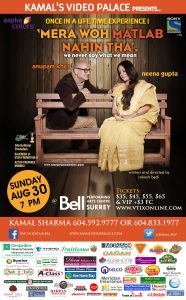 Canada’s fastest growing municipality Surrey has been seeing an increasing number of artists from India, Pakistan & Afghanistan lately and KVP Entertainers amongst others, have brought popular artists like KAILASH KHER, PANKAJ UDHAS & NITIN MUKESH at Surrey’s iconic Bell Performing Arts Centre, however, Kamal’s Video Palace latest offering is Bollywood at its glamour best as one of Hollywood & Bollywood’s best ANUPAM KHER spearheads the cast of much acclaimed stage play MERA WOH MATLAB NAHIN THA…  with NEENA GUPTA & RAKESH BEDI, who’re the biggest names in Bollywood, TV industry  & Theatre world . Written & directed by RAKESH BEDI, the stage play has been attracting record crowds in America and this weekend the Canadian cities of Toronto & Vancouver will get to see their Bollywood heroes performing live on stage for the first time as Surrey hosts this touring artists from India at BELL PERFORMING ARTS CENTRE on SUNDAY, AUGUST 30th @ 7 PM. The theatre lovers will walk through RED CARPET for their memorable photos and NANAK FOODS will offer their mouth-watering delicacies to all to welcome the Bollywood greats. Surrey has hosted many Punjabi plays in the past but the glitz & glamour of Bollywood is performing for the first time and that explains the unprecedented demand for the tickets as $ 55, 65 & 75 is already SOLD OUT and with very few tickets left, it seems that SURREY would join the ranks of other North American cities which have had HOUSE FULL performances so far. ANUPAM KHER & NEENA GUPTA are certainly joining their fellow artists like Farooq Shaikh, Shabana Azmi, Jaya Bachchan, Paresh Rawal, Rajpal Yadav & Tiku Talsaniya, who has already performed in Vancouver but they certainly are the first from Bollywood to perform in Surrey and that’s cause for celebration in SURREYPUR! For more information about the stage play, please call KAMAL SHARMA of KAMAL’S VIDEO PALACE at (604) 592-9777 or (604) 833-1977 or visit
www.vtixonline.com or www.kamalvideopalace.com

Sanjay Dutt is back!!!

Sanjay Dutt has been released from Yerwada prison for 30 days as his daughter is having a nose operation and the first prominent Bollywood personality to visit him was producer-director Vinod Chopra. Sanjay Dutt is the MUNNA BHAI of Vinod Chopra’s films and it’s to be seen if they both discussed another Munna Bhai film together. RANBIR KAPOOR was the

show stopper at MANISH MALHOTRA fashion show and won the hearts of every one present. KARAN JOHAR has quit the JHALAK DIKHLA JAA Reloaded. ALL IS WELL disappointed at the box-office while MANJHI: The Mountain MAN was appreciated for Nawazuddin Siddiqui’s wonderful performance but all eyes are on this week’s releases of Kabir Khan’s PHANTOM with Katrina Kaif & Saif Ali Khan, KAUN KITNEY PAANI MEIN with Kunaal Kapoor, Saurabh Shukla & Gulshan Grover and Gippy Grewal’s FARAAR. With that, it’s time to say goodbye but not before reminding you all to watch this week’s YAADEIN as NITIN MUKESH JI talks about his Bollywood memories on Sunday,August 30th @ 1 PM on SMC#116 !