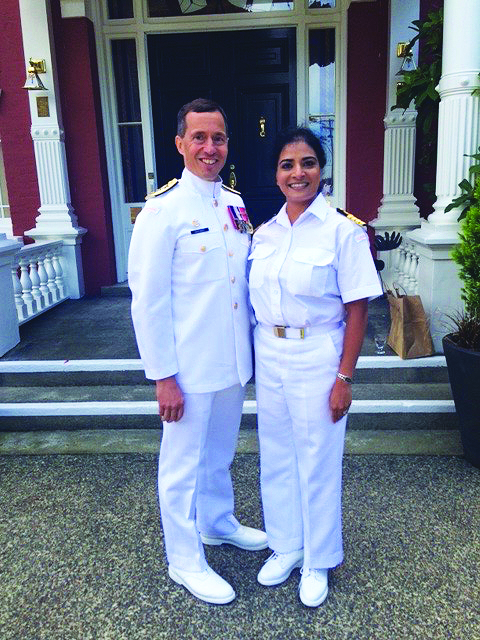 About a year ago, Anita Huberman, the CEO of the Surrey Board of Trade (SBOT), received a phone call from the Canadian Defense Minister, Jason Kenney who asked her if she would accept a commission in the Royal Canadian Navy, as an Honourary Captain.

“I had no idea it was going to happen,” she said. Along with the Minister,  I met with the Vice-Admiral in charge of the navy, who explained it is a volunteer position and my role is to be an ambassador. It comes with a title, Honourary Captain, which I can use for the rest of my life. I’ve been with the Surrey Board of Trade for twenty-two years, I’m a trustee of the National Film Board, and I thought this would be something very different than what I was doing, so now I’m an ambassador for the Navy. It’s an exciting journey and opportunity.  In fact I’ve just returned from Ottawa where I attended my first symposium with all the Honourary Captains.  It was an eye-opening experience, but the group was very welcoming.”

“At their request, I speak at different events, or attend specific events in uniform and represent the navy.  Of course, everything I do, while in uniform has to be approved, and when I’m speaking to government officials it’s to talk about investments in the navy.  I’m very well versed in terms of government advocacy and in speaking to politicians, so I think they found that would be a great asset, because investments in the military, for many government officials, does not seem to be a priority.”

“The key thing that we spoke about at our meeting in Ottawa, were the concepts of innovation and productivity, and connecting it to the navy and all of the things they do around defense, around emergency preparedness, and industry linkages,” said Huberman. “My role as an Honourary Captain is in trying to develop a project that will actually elevate the profile of the Navy.  They haven’t told me exactly what to do. Instead, I have to figure it out for myself and try to create a legacy.

Huberman said that whenever she is acting on behalf of the navy, she always considers the SBOT as part of the equation as well.

“The SBOT is always an active part of everything I’m involved in, in this context,” she said.  “My Board directors, of course, know that and support it.  I consider that the Honourary Captain’s role, even when I was in Ottawa this past week, as an opportunity to showcase the SBOT as well as Surrey itself, and the many opportunities that exist here.  It was such an honour to be able to do that.”

To become familiar with military protocol, she attended the navel base in Esquimault, near Victoria, during the summer. There, she had three people assigned to work with her, provide advise on how to wear the uniform and otherwise become more familiar with the culture.

“They don’t provide any formal training, so I’m learning by asking questions of my three advisors, and by speaking with other Honorary Captains,” said Capt. Huberman. “I’ve learned that I hold the same rank and privileges as a regular Captain in the navy, who had to serve for twenty-five years, and because I have no military background I’ve been told that I have to prove myself. So I’m learning what I need to know by reading and by asking questions.”

As we are approaching Remembrance Day, Captain Anita Huberman (Honourary), RCN was asked about her feelings at this time of year.

“Every year on November 11, Canadians take pause and hold a moment of silent remembrance for the men and women who serve and have served Canada during times of war and peace. This includes our Royal Canadian Navy. This Remembrance Day, more than 700 personnel from Maritime Forces Pacific find themselves away from home on local operations and on international deployments. We need to remember them and say thanks for their sacrifice.”

Premier Horgan stands up for B.C.’s interests in Ottawa and Washington,...