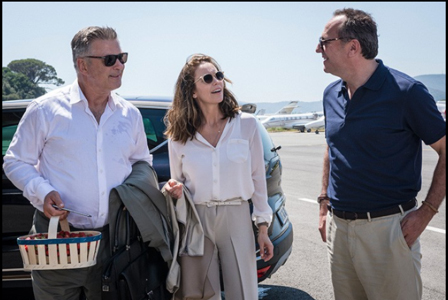 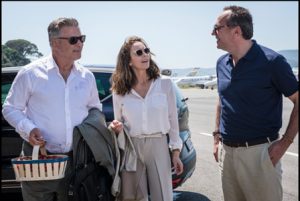 Now that the French election is over perhaps you may fancy a trip to fabled France. A high flying American couple takes a u turn with romantic consequences in Paris Can Wait. Lovers of all types may wait no longer for this Sony Pictures Classics now biding for your time at most likely the International Village or Fifth Avenue Cinemas.

Politics runs deep in Alec Baldwin’s veins taking a break from his spot on lampooning (or should I say harpooning) of Donald Trump Baldwin (Malice) is in his element as a busy as can be movie producer. Married to a stunning Diane Lane (Secretariat) the pair seem to be ok on The surface. Whether their love holds true is put into play as a mutual friend does the husband a favour by escorting his wife to Paris. Or does he?

First time director Eleanor Coppola makes her film debut at 80. Just a touch slow this movie shows some nice shots of the scenic French countryside and some luscious cuisine. Whether you buy into the will she or won’t she have sexy fun with host with the most Arnaud Viard Who’s smooth as silk is the six million dollar question. Can’t tell you how it all turns out as that would spoil the surprise. Suffice it to say that maybe because of age those love juices may be just a touch past the expiry date.

A glimpse of Shiamak Summer Funk 2019!