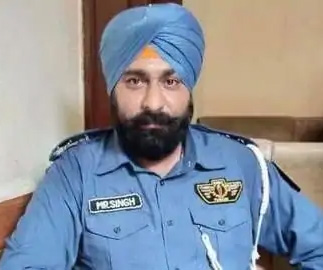 Lahore: Pakistans first Sikh police officer Gulab Singh Shaheen has claimed that he was thrashed and evicted from his house in Lahores Dera Chahal along with his children and wife, following a property dispute with ETPB – the parent body of Sikh Gurudwara Prabandhak Committee.

Taking to social media late on Tuesday, Singh claims that he was evicted by Evacuee Trust Property Board (ETPB), the parent body of Sikh Gurudwara Prabandhak Committee (PSGPC).

“My turban was forced open and hair was untied,” Singh says in one of the videos he shared on Facebook.

In a video, Singh can be seen pleading to police to give him “at least 10 minutes” to be in the place where they have been staying since 1947.

He has also appealed to Sikhs across the world to help him and take note of disrespect to a Sikh’s hair and turban.

The ETPB maintained Singh had illegally occupied the “Langar” Hall of Gurdwara Janum Asthan “Bebe Nanaki Dera Chahil”, which was vacated by an anti-encroachment team.

Evacuee Trust Property Board, established in 1960, is a statutory board of the Government of Pakistan, which administers evacuee properties and shrines of Hindus and Sikhs attached to religious, charitable or educational trusts, left behind by Hindus and Sikhs who migrated to India after the 1947 partition of India.