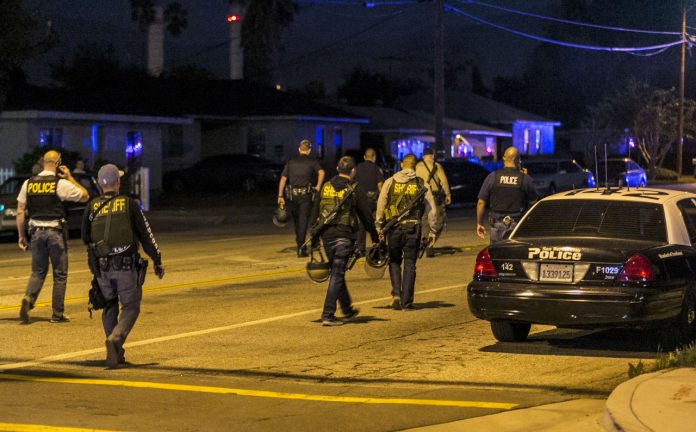 Washington: Investigators on Thursday hunted for motives why a heavily armed US-born county health worker and his Pakistan-born wife killed 14 people and injured 17 others during a holiday party in California.

The suspects in Wednesday’s shooting in San Bernardino were identified as Syed Rizwan Farook, 28, who was born in the US, and a woman described as his Pakistan-born wife, Tashfeen Malik, 27, according to the Washington Post.

The couple apparently did commando-style planning for the deadliest US mass shooting since the Sandy Hook Elementary School massacre on December 14, 2012 when a gunman shot 20 children and six adult staff members in Newtown, Connecticut.

“I don’t think they grabbed the guns and tactical gear on a spur-of-the-moment thing,” San Bernardino Police Chief Jarrod Burguan was quoted as saying hours after the rampage and a police shootout that left both alleged shooters dead.

Armed with .223-calibre assault rifles and semi-automatic handguns and wearing masks and body armour, Farook and Malik are believed to have opened fire at a social services centre in San Bernardino around 11 a.m. on Wednesday.

Federal agents have traced the origins of the four guns recovered from the suspects, at least two of them bought legally, according to the New York Times.

The federal Bureau of Alcohol, Tobacco, Firearms and Explosives confirmed that it had traced all four guns, but it would not identify the buyer, which two weapons those were, or say where they were bought, the NYT said.

Officials cited by the daily said the two assault rifles were variants of the AR-15, the semiautomatic version of the military M-16 rifle; one was made by DPMS Panther Arms, and the other was a Smith & Wesson M&P model, a designation meaning military and police.

Despite only accounting for 5 percent of the global population, an astounding 31 percent of the world’s mass shootings occur in the US, NBC reported citing the University of Alabama Department of Criminal Justice.

There have been more mass shootings — defined as incidents in which four or more victims are shot — than days in the calendar year, it said.

According to ShootingTracker.com, which tracks deaths by guns in America, the US has seen 355 mass shootings so far in 2015. Twenty days of 2015 saw four or more mass shootings in a single day.

In the past week, there have been six mass shootings, ShootingTracker.com reports — including the shootout at a Planned Parenthood clinic in Colorado Springs, Colorado.

The San Bernardino massacre was the second one on Wednesday alone. Earlier in the day, four people were shot at in Georgia, one of whom died.

There are roughly 300 million firearms in the US — enough for every American. Tens of millions of Americans, however, do not own guns, NBC said.

Fifty times more Americans have been killed by guns than terrorist attacks since 9/11, it said citing the US Centres for Disease Control and Prevention and Global Terrorism Database.

‘The Interview’ to open in 27 Canadian theatres on Friday, Sony...