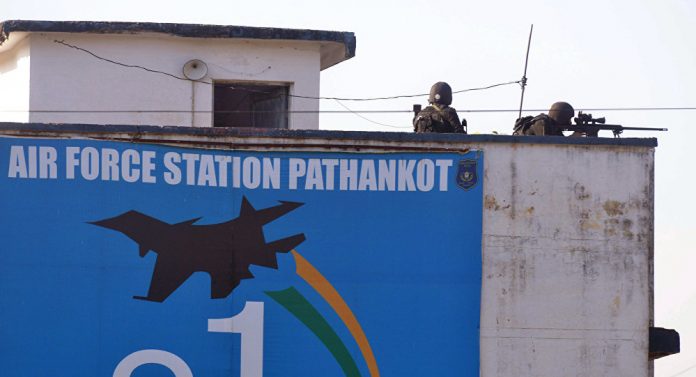 Islamabad, Jan 11 (IANS) Pakistan on Monday submitted to India its initial findings on alleged Pakistani links to the Pathankot terror attack saying that the telephone numbers given by India were not registered in Pakistan, a news report here said.

A Joint Investigation Team, formed following a directive of Prime Minister Nawaz Sharif, submitted the initial findings on the alleged Pakistani links to the terrorist attack on the Indian Air Force station in Punjab’s Pathankot district earlier this month.

“According to sources close to the development, the investigation report has been handed over to Indian authorities,” The News International said.

It said Indian authorities provided Pakistan details of telephonic conversations that terrorists, believed to be Pakistanis, had had with their handlers and family members from the air base.

According to the Indian authorities, the terrorists who sneaked into Punjab and attacked the IAF base on January 2 were affiliated to the proscribed outfit Jaish-e-Mohammad.

The report quoted unnamed sources as saying that the telephone numbers given by India were not registered in Pakistan.

“The investigation agencies were further investigating (leads) pertaining to Pathankot attackers,” it said.

A media report on Monday said Pakistan’s Inter-Services Intelligence (ISI) and Military Intelligence were helping probe the suspected Pakistani link to the terror attack on the IAF base.

The ISI, the Military Intelligence and the Intelligence Bureau were part of a Joint Investigation Team (JIT) formed following a directive of Prime Minister Nawaz Sharif, the Express Tribune reported.

The decision to form the JIT was taken at a high-level meeting chaired by Sharif “a few days ago”, it said.

Pakistani news reports on Friday had said that Sharif directed the Intelligence Bureau to probe the leads provided by New Delhi on the alleged Pakistani links to the January 2 terror attack in Punjab.

The pre-dawn attack on the Indian Air Force (IAF) station killed seven security personnel. Security forces killed all six attackers who were said to have sneaked into Punjab from Pakistan.

“Nawaz (Sharif) is taking an active role in getting to the bottom of the Pathankot incident,” a source in the Prime Minister’s House was quoted as saying.

“He (Sharif) also discussed the issue with army chief Gen Raheel Sharif and took him on board about the decision to form a JIT,” it added.

India has provided Islamabad “actionable information” on the terrorists’ alleged Pakistani links. New Delhi wants Sharif to crack down on those who planned the audacious terrorist attack.

After the terror attack, Prime Minister Nawaz Sharif promised his Indian counterpart Narendra Modi that his government will act on information provided by New Delhi on the terrorists’ alleged Pakistani links.

“Nawaz (Sharif) has assured his Indian counterpart (Narendra Modi) that Pakistan will investigate the matter and make the results public,” the report said.

But Pakistani officials have told their media that the information given by India was not enough and may not stand scrutiny in a court of law.

The News International quoted “highly placed diplomatic sources” as saying that the foreign secretary-level talks between Pakistan and India could be deferred by New Delhi as there was no information so far about the visit of the Indian foreign secretary for the January 15 talks in Islamabad.

“It is likely that India would notify the postponement at the eleventh hour some time next week,” the daily said.

No communication has taken place between Islamabad and New Delhi on the foreign secretary-level talks since the Pathankot attack, it said.

Pakistan does not want the foreign secretary-level talks to get derailed as they were expected to pave the way for a comprehensive composite dialogue covering all outstanding disputes, including Kashmir, it added.