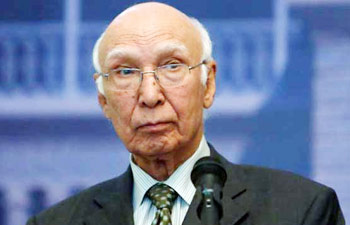 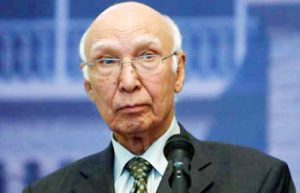 Islamabad: Pakistan wants to have an exclusive dialogue with India on Kashmir, the country’s top foreign affairs adviser Sartaj Aziz said on Friday.

India suspended bilateral dialogue with Pakistan after gunmen attacked an Indian air base at Pathankot in January. India had blamed the Pakistan-based Jaish-e-Muhammad militant group for the attack.

Sartaj Aziz said Pakistan’s Foreign Secretary would write a letter to his Indian counterpart to extend a formal invitation for the talks.

He told the media that Pakistan would invite India for the Kashmir talks despite the stalled Composite Dialogue process between the two countries.

Pakistan and India have fought three wars, two over Kashmir, since their independence in 1947.

“The Envoys Conference noted that India’s policy of not engaging in a comprehensive dialogue with Pakistan was not conducive for peace in South Asia,” Aziz said.

The conference vowed to continue diplomatic, political and moral support to “the Kashmiri movement for self-determination”.

The advisor said Kashmir would be on top of the agenda of Pakistan during the forthcoming session of the UN General Assembly.

Sartaj Aziz said Pakistan had written to the UN Human Rights Council on “human rights violations” in the Kashmir Valley and the council had conveyed to India that it wants to send a fact-finding mission to Kashmir.

India had accused Pakistan of interfering in the affairs of Jammu and Kashmir following the mass protests that engulfed the Kashmir Valley after the July 8 killing of Hizb-ul-Mujahideen commander Burhan Wani.