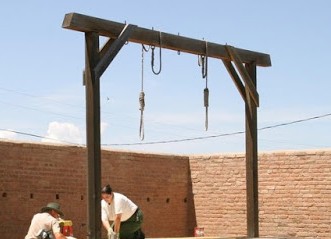 Islamabad, June 9 (IANS) Pakistan has executed approximately 150 “criminals” over the past six months amidst concerns that those executed may have been tortured into making false confessions, reports The Independent.

The moratorium was lifted completely on March 10, leaving 8,500 prisoners on death row — one of the largest death row populations in the world — up for execution.

The report says ministers in Pakistan plan to execute hundreds more despite concerns over “forced confessions” from international organisations.

Many of those on death row were believed to have been juveniles at the time of their offence — a breach of Pakistani and international law as Pakistan is a signatory to the International Covenant on Civil and Political Rights that forbids minors being sentenced to death or executed.

A 2013 study of 30 Pakistani death row prisoners conducted by Reprieve and the Justice Project Pakistan found that 10 percent of prisoners were arrested and sentenced to death as minors.

The study infers that according to these findings, there might be at least 800 child offenders among the 8,261 on death row.