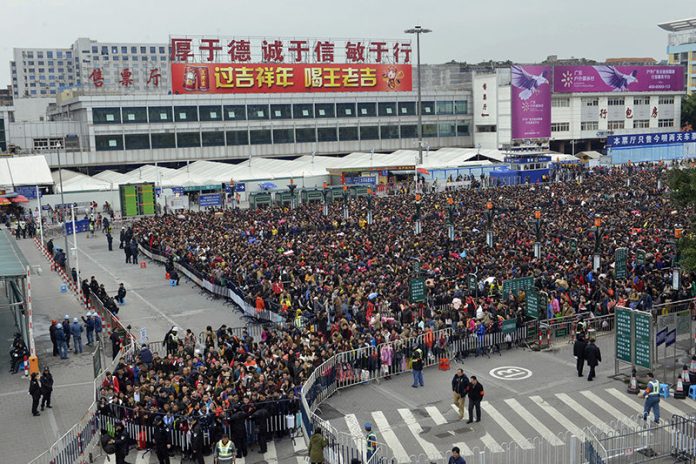 Beijing, Feb 3 (IANS) More than 50,000 passengers were stranded at China’s Guangzhou railway station as snow and sleet in central and eastern provinces delayed 27 trains, a railway spokesperson said on Tuesday.

An estimated 175,000 passengers were scheduled to travel by train in Guangzhou on Tuesday. The railway station was fully packed with passengers and, during the most crowded hours, people waited in long queues for three hours before getting into the building.

To ease congestion, local authorities have instructed buses and subway trains to skip the stop closest to the railway station, so passengers need to walk about 30 minutes to the station.

Chen Jianping, spokesperson for Guangzhou Railway Group Corp, said trains have been diverted from Nanchang and Nanning, and they plan to operate four additional trains to the central province of Hunan, a major destination for stranded passengers.

The municipal public security bureau has sent 6,200 policemen to help maintain order at the railway station.

The snowy weather that hit many provinces in central, eastern and southern China since Sunday disrupted the travel rush that involves millions of people eager to get home for the Chinese lunar New Year’s Eve on February 7.

Chen said the passenger flow would return to normal in two to three days, when the snow is expected to stop.

Myanmar’s president not to run in general election: Ruling party