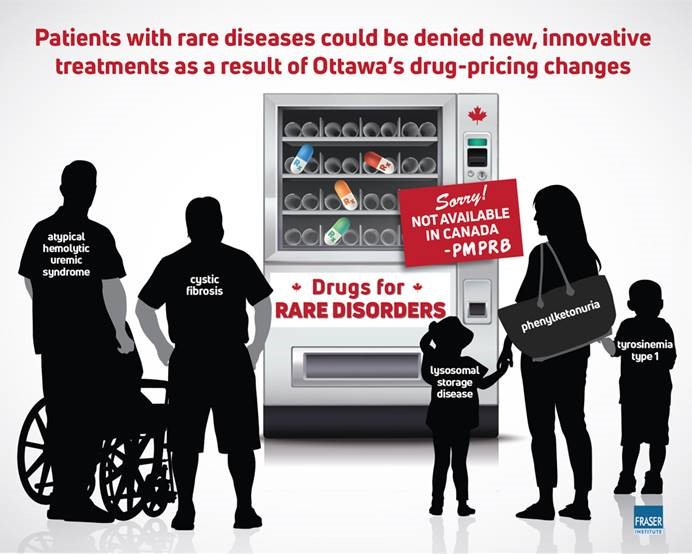 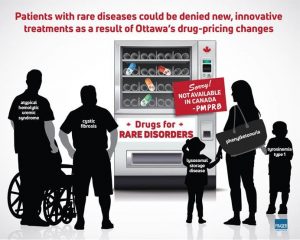 Starting next year, the Patented Medicine Prices Review Board (PMPRB)—a federal body that regulates the prices of all patented medicines in Canada—is planning to use new rules for establishing drug prices with the goal of lowering costs.

“Drugs for rare diseases are often very expensive because they are costly to develop and target a small number of patients, so when governments push too hard to lower prices, pharmaceutical companies have little incentive to launch these drugs,” said Dr. Nigel Rawson, Fraser Institute senior fellow and author of Regulatory, Reimbursement and Pricing Barriers to Accessing Drugs for Rare Disorders in Canada.

The study finds that patients with rare diseases in Canada—defined as affecting less than 10 of every 100,000 people—are already denied new drugs available elsewhere. For example, between 2002 and 2016, 23 drugs for rare or ultra-rare diseases—approved for use in Europe and the United States—were not available in Canada.

Moreover, Canada currently does not have an “orphan” drug policy, which can help incentivize pharmaceutical companies to launch medicines for rare diseases. (Orphan drugs treat diseases which are rare and affect so few people that it’s extremely expensive for companies to research and develop treatments.)

Instead of making access to new costly drugs easier, the federal government is fixated on regulating prices down to a level that it deems to be acceptable.

Unfortunately, lowering costs by restricting the prices that manufacturers can charge for certain drugs in Canada—which, again, is the federal government’s aim with the proposed changes to the PMPRB—will discourage pharmaceutical companies from marketing all drugs in this country, but especially those for rare diseases.

“Patients suffering from rare diseases in Canada are already denied many treatments available elsewhere, and the federal government’s changes to drug pricing will make the situation even worse,” Dr. Rawson said.