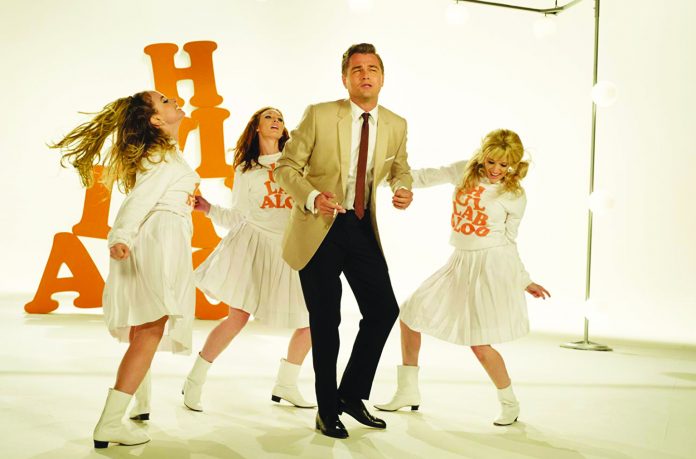 Said to have his job on the line, the head of Columbia Pictures and Sony Studios green lit Once Upon A Time In Hollywood. Out to prove those special effects superhero comic strip movies wrong one can not fault any studio for bringing out more “substantive” fare. As a result trendsetting director Quentin Tarantino against serves to impress in this well made drama. Join the turmoil at Cineplex Cinemas and Landmark Theatres around B.C.
Fans of Tarantino and the way he tells stories will enjoy this movie. Partly based on the infamous Charlie Manson murders our story follows the disjointed careers and lives of a 60s television star and his faithful sidekick. For the first time ever box office stars Leonardo DiCaprio and Brad Pitt are in their element and in the zone as Rick Dalton and Cliff Booth. Together these two confront their own demons as their careers go up and down with the times.
A picture perfect recreation of the swinging 60s era comes full circle with Margot Robbie playing the starlet Sharon Tate. Complete with some excellent supporting actors the atmosphere of the era is brilliantly recreated, and the film reads like an insider’s account of the movie industry. Unfortunately, the film feels bloated at two hours and some forty minutes.
You do get your moneys worth watching two actors at their peak having a grand old time in the heady days of Hollywood. And fans of classic movies and television shows will love how they are presented in this rather enjoyable addition to our summer fare viewing. Worth a look.