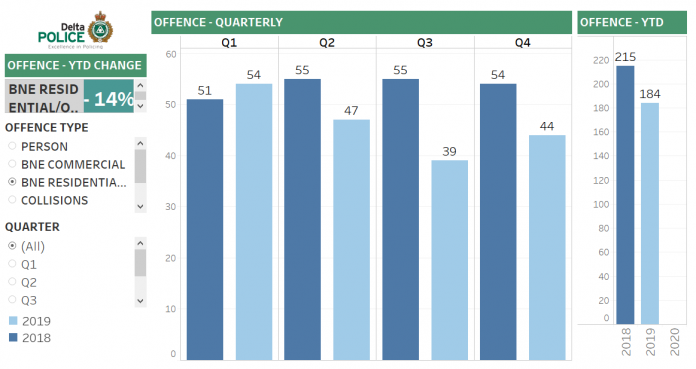 Delta Police saw fairly steady numbers in most crime areas in 2019, though there was a notable decline in break and enters to both residential and commercial properties. There was however a significant increase in the number of drunk drivers being served Immediate Roadside Prohibitions (IRPs).

In 2019 Delta Police handed out 551 Immediate Roadside Prohibitions, with penalties ranging from 3 to 90 day driving suspensions and from $600 to thousands of dollars in fines, with vehicles impounded. That compares to 355 IRPs which were handed out in 2018. The number does not include anyone who potentially faces criminal impaired driving charges, those who received a 24-hour driving suspension, or those who underwent a Standard Field Sobriety Test (administered when someone is suspected to be impaired by drugs.)

“Unfortunately that trend seems to be continuing right through into 2020,” says Chief Neil Dubord, head of the Delta Police Department. “One week in January we pulled 15 drunk drivers off Delta roads. This past month we also had a crash involving a suspected drunk driver, in which a young child was seriously injured. So it won’t be a surprise for the public to learn that our officers will continue to do significant enforcement to stop impaired driving this year.”

Residential break and enters declined to 184 throughout 2019, compared to 215 the previous year, a 14% drop. Commercial break and enters were down 15% to 126, from 149 the previous year. Both dropped in the fourth quarter of 2019 as well. Homeowners and businesses with video cameras facing a street, driveway or parking lot are asked to register for the DPD Community Watch Program, if they would consider sharing video footage with police when there is a crime in the area. Register at https://deltapolice.ca/cwp/.

Theft from auto was up just slightly throughout 2019, with 688 incidents reported to police in 2019, compared to 682 in 2018. “Fortunately we saw an encouraging trend in the second half of 2019, with the lowest numbers of the year for theft from auto in the last quarter,” says Chief Dubord. He continues to urge the public to do their part to discourage this crime by removing all valuables – sunglasses, garage door openers, loose change etc – from their vehicles.

Persons offences were up 6% overall in 2019, with 873 incidents last year compared to 820 in 2018. Again, the last quarter of 2019 saw numbers headed in the right direction, with fewer incidents reported to police, compared to earlier in the year. The most common type of persons offence is assault, and most involve persons known to each other, or occur as a results of someone’s profession, such as a loss prevention officer.