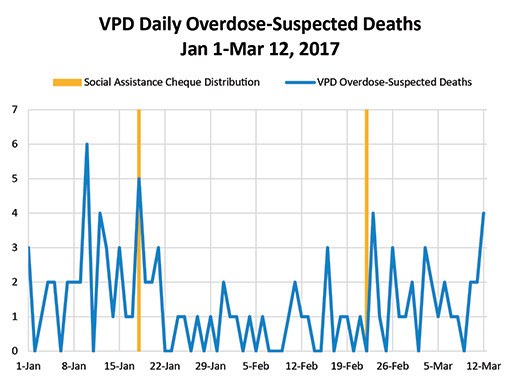 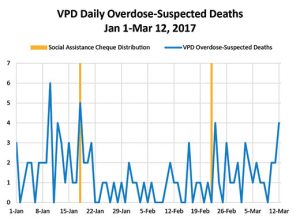 Vancouver Fire and Rescue Services (VF&RS) reported 92 overdose calls for the week of March 6, a drop from the previous week but still higher compared to historical data.

The majority of the calls were in the Downtown Eastside, however the number of cases outside the downtown area remained significant.

Furthermore, while there is a popular perception that rates always spike during income assistance cheque week, our data demonstrates overdoses are happening all the time and very challenging to predict.

Despite fewer calls to VF&RS, Vancouver Police reported 12 suspected overdose deaths across the city last week – including four in one day on March 12. These rates remain amongst the highest weeks in the year to date. Toxicology reports are not yet complete on these cases, and final overdose death numbers need to be confirmed by the BC Coroners Service.

“The number of families impacted by drug overdose deaths across Vancouver in the fentanyl crisis is truly heartbreaking,” says Mayor Gregor Robertson. “The BC government recently received $10 million from the federal minister for health to fight the overdose crisis. Those funds should be used to broaden access to clean prescription drugs and substitution therapy, and expand treatment-on-demand services to save lives and help people recover from substance use.”

Health Canada reported high levels of carfentanil this week. Data from LifeLabs has shown an increase in the positive detection rate of carfentanil and other deadly synthetic opioids in drugs tested from 1-2% in January 2017 to 4-6% in March 2017.

It has been nearly one year since BC’s provincial health officer Dr. Perry Kendall declared the significant increase in drug-related overdoses and deaths a public health emergency on April 14, 2016. Opioid dependence is one of the most serious health concerns in the province. 922 people died from overdoses last year in BC – nearly 25% of them in Vancouver. Drug overdoses are now among the top 10 causes of death in British Columbia, according to data from the Vital Statistics Agency. In comparison, the number of deaths due to Motor Vehicle Accidents in 2015 – 300 deaths – was one-third the number of overdose deaths in 2016

Did you lose a ring at the Junior Mountie Camp’s Show...